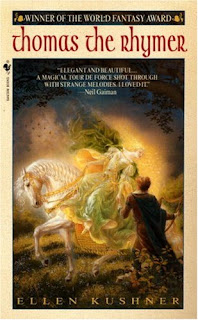 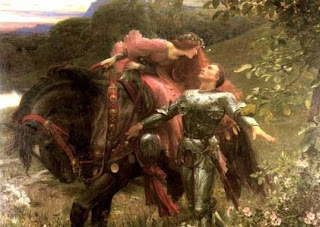 Some of you long-time (ha...I've only been blogging a couple of months!) readers of The Beautiful Necessity will remember one of the first blogs I did about modern artists cribbing from the Pre-Raphaelites to create new art without any real acknowledgement of the obvious source material. In the blog, I showed a couple of examples I hated, and mentioned my favorite living artist, Kinuko Craft, as the epitome of an artist who paints in an atmospheric Pre-Raphaelite style without having to steal from the masters.
Well, first of all, I've realized since writing this blog that it's not so much the using of Pre-Raphaelite art as a model that I dislike, as it is using it and then putting it together poorly. In my opinion, the artwork on the cover of the George Martin book (A Clash of Kings) takes art that is both technically and aesthetically pleasing, and slaughters it for elements that are put together into a well-painted but aesthetically awful artwork.
Anyway, all this to say that I must eat my hat when it comes to Kinuko. Today I was looking at an artwork of hers I've seen a million times before, and all of a sudden I was shocked to realize that I'd never noticed...it's quite a copy of Dicksee's La Belle Dame Sans Merci! I would point out, however, that this is an example of what I call Pre-Raphaelite inspiration/cribbing done RIGHT. Craft realizes the power of the pose of the original figures, but reworks it in her own style, with her own new wardrobe and mood to the artwork.
I realize that I may be splitting hairs here, but I definitely think there's a difference between doing it well and doing it badly. When done badly, it enfuriates me. When done well.... apparently I don't even always notice!
Posted by Grace at 1:51 PM

The paintings are similar, but I honestly do not think Kinuko Craft plagiarized this piece. The angle of the Faerie Queene on her steed is very different. They just share a mai n similarity in that both piece feature women leaning down from horses.

I don't know if I'd call it plagiarism, but I definitely think she had the original in mind, perhaps even on her desk, when creating this one...the angle of the faerie queen's hand holding the bridle is practically identical in the two images.

It's so hard to say sometimes. I agree that this piece is ridiculously similar, but I reiterate my comment on the original blog- Could it really have been semi-accidental? The image is obviously powerful and iconic, and I think it's possible to create something without realizing how much another work has inspired you! I wonder if she was paying homage to it, copying its power, or did she see La Belle Dame sometime afterward and say, "Oh! That's where that came from!" much like you did? I'm not saying I disagree with your judgement. You know far more about this than I do. I'm just ruminating.

Well, you're the second one to suggest that for this piece, so perhaps I'm wrong (gasp! lol), but when I look at her right hand, and how it's posed exactly like the artwork with the reigns....well, I'd be surprised :)