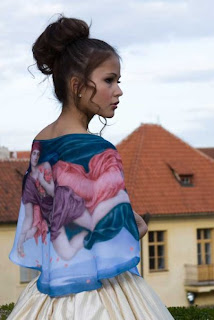 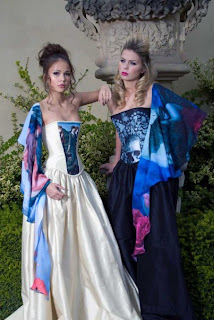 Sadly, it is my understanding that they haven't successfully found a way to produce the Burne-Jones corset for available sale, but they are working on making a new line of Pre-Raphaelite high quality wraps for sale in their store soon.

Baba Studio has a really great graphic arts eye for knowing what artworks will work in what mediums, and that knowledge really shines through in this corset and wrap.
Posted by Grace at 8:39 PM 4 comments:

I still have more to say about the Aesthetic Movement, rest assured, but today I thought I'd share a few tattoos inspired by Pre-Raphaelite and associated artists. A friend, who shall remain unnamed until her permission is obtained to share, just got a new tattoo that was apparently inspired by William Morris. The idea appealed to me so much, I wanted to search online for more Brotherhood tattoos. Surprisingly, there aren't very many!
A gorgeous tattoo inspired by William Morris: 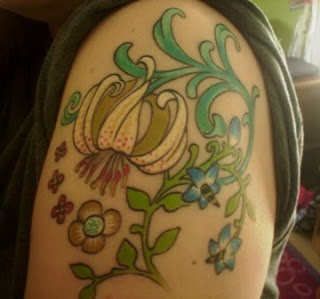 This one is based on his Willow pattern. I love how very organic it is. 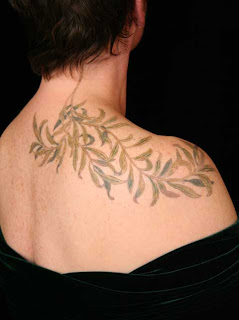 This one is based on Christina Rossetti's Goblin Market: 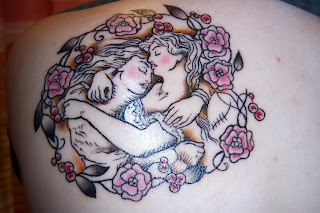 The below two are inspired by a William Morris poem.
LOVE is enough: though the World be a-waning,
And the woods have no voice but the voice of complaining,
Though the sky be too dark for dim eyes to discover
The gold-cups and daisies fair blooming thereunder,
Though the hills be held shadows, and the sea a dark wonder,
And this day draw a veil over all deeds pass'd over,
Yet their hands shall not tremble, their feet shall not falter;
The void shall not weary, the fear shall not alter
These lips and these eyes of the loved and the lover.
by William Morris(1834-1896) 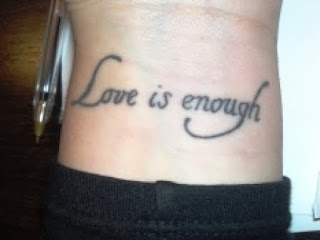 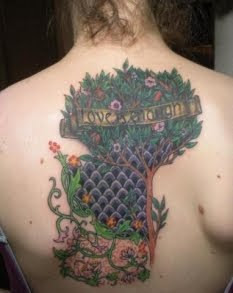 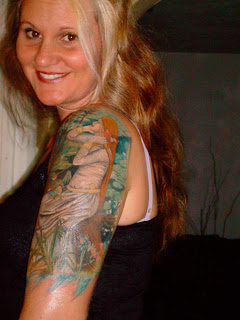 Burne-Jones had his own opinion of the famous "tattooed lady" whom he sketched: 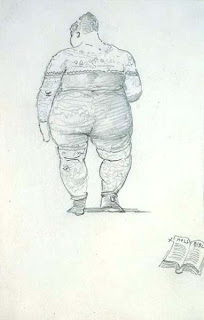 But I think the Brotherhood would approve of the above gorgeous tattoos! 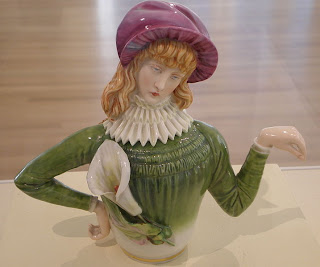 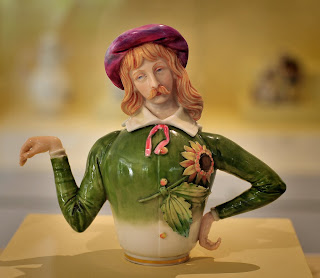 So, lately I've been reading a lot about the late Victorian philosophical and cultural movement of Aestheticism. The definition of the movement, according to the Philosophy Dictionary is the "doctrine associated with late 19th-century writers and artists, including Walter Pater, James McNeill Whistler, and especially Oscar Wilde. It holds that the appreciation of art and beauty is the highest aim of human life, and especially that the pursuit of such experience is not constrained by ordinary moral considerations. Art itself serves no ulterior moral or political purpose. The ‘Aesthetic Movement’ was a useful reaction against the didactic religious and moral art of the time and helped artists and critics to concentrate upon the formal and internal qualities of works of art."

Although not all of the Pre-Raphaelites were Aesthetes, their art was rather central to the movement. Rossetti's penchant for purchasing blue and white china started a collecting craze, and in Burne-Jones' biography written by his wife, he lamented that sunflowers had become such a "trend" (they were a symbol of Aestheticism) and emphasized that his love for sunflowers predated the movement. The work of William Morris (and the creation of Red House) is often mentioned in articles on Aestheticism as well.

Anyway, Aestheticism and the Pre-Raphaelites were quite closely related, so this week I wanted to do a few posts on Aestheticism.

First I had to feature this famous teapot. The Oscar Wilde / Patience / Aesthetic teapot (can be found using all three search terms, but it's mostly known simply as the Aesthetic teapot) was made as a reaction to the bold and unique fashion and personality of Oscar Wilde, the Aesthetic Movement's "poster child." Any counter-cultural movement will encounter its critics and its parodies, and one form of parody was this teapot, made to resemble an Aesthetic dandy. One major criticism of Aestheticism was that it was demasculinizing, and the statement made with this teapot certainly would be viewed today as more than a little intolerant. But I have to admit, I find the man depicted on it utterly charming.

"Probably the most famous figural teapot is the "Aesthetic" teapot made in 1882. The clever, two-sided pot depicts a man on one side, a woman on the other. It was inspired by the Gilbert and Sullivan operetta "Patience."

The teapot, made by the Royal Worcester pottery in England, is difficult to clean. The handle and spout made pouring tea difficult. The head was the removable cover, and the tea was poured from a hole in the figure's hand."

Written on the bottom of the teapot is the words "Fearful consequences through the laws of Natural Selection and Evolution of living up to one's Teapot."

Note the sunflower on the man's side of the teapot, and the lily on the woman's. All sorts of parodies featured the doe-eyed gazing at these flowers on the part of Aesthetes. Also note the gorgeous smocking on the woman's gown, which was often featured on Aesthetic gowns.

When I read that this teapot was not one-of-a-kind, but mass produced, I thought to myself "well perhaps I can save up and someday purchase one of them." Silly me. After some searching, I discovered a listing on Christies for a teapot that sold at auction in 2001. The final hammer price? $11,163. That would buy a lot of tea.