The Only Thing Harder Than Being a Victorian Female Artist... 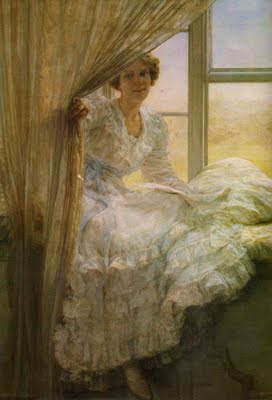 ...was apparently being a talented female artist with a very very famous artist father.

Or so I discovered while reading the excellent book, Artistic Circles: Design and Decoration in the Aesthetic Movement. I was reading along, and came across an absolutely breathtakingly gorgeous watercolor on a full page. 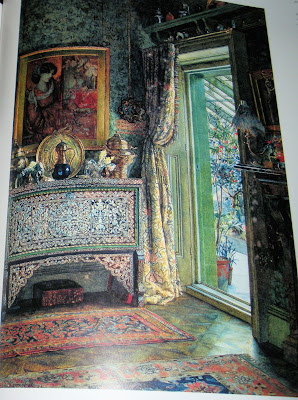 Apologies for the bad quality image...it's a photo of the book page. But you can see the jewel colors, the insane detail on the inlaid furniture, and the stunning reproduction of the Rossetti chalk sketch framed above the doorway. The light, the colors, the detail...this image is just jaw-droppingly amazing. In the days before color photography, I can think of no other interior decor painting I have been more impressed with.

Click the image to see more details, do. It's a photo of a page of a book, but you will still be impressed by all the little intricacies included.

More illustrations in the book impressed me, and I saw they were all done by the same artist. 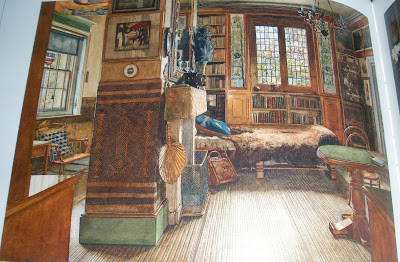 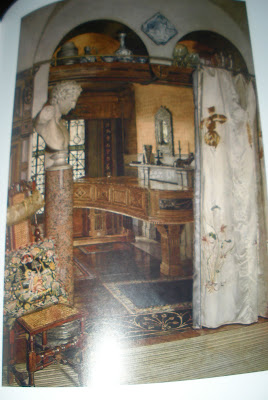 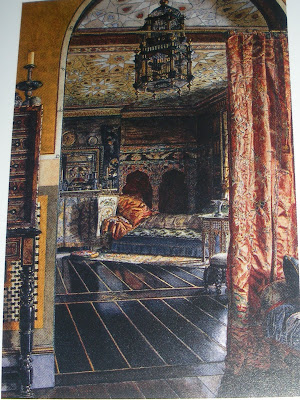 The name on these artworks were A. Alma-Taldema....Anna Alma-Tadema, Sir Lawrence's daughter. And these watercolors were done when she was a teenager.

But the sad thing is...I photographed these images from the book as a note to myself to look up more about Anna Alma-Tadema and her stunning talent online. Yet when I went on the internet to actually search her out, I found...nothing. Less than nothing...every link was either a portrait of her done by her father, or a brief mention in a biography of her father.

Or, even worse, when I searched images for more of her interior artworks, or even better quality images than my poor photos, I actually found numerous websites that attributed her beautiful work to her father.

The few references to her ability that I found online were alarmingly dismissive. Her work is described as that of a "precocious teenager," of moderate talent. The unspoken yet clear undertone of references to her work are that they were just a whimsical past time, and nothing of any note, unlike her father's epic work. Yet it wasn't her kinship to Sir Lawrence that drew me to these interior images (truth be told Alma-Tadema was never my favorite artist anyway), but her own impressive skill.

The book from which I took these pictures gives only a brief discussion to them.

"As children, Alma-Tadema's daughters wore variations on every kind of artistic fancy dress, from quaint, quasi-medieval to Kate Greenaway dresses, which must have made their friends mock. The date, 1885, of Anna's exquisite [YES!] small paintings is a clue to their purpose, as souvenirs. In that year the Alma-Tademas left the house on which they had lavished such loving attention -- the house was fitted up, according to the Art Journal, 'to make it appear as much like a Roman villa as was consistent with the peculiarities of the English climate and the comforts of an English home' -- to settle in a more imposing residence nearby, the detached villa at 17 Grove End Road recently vacated by Tissot."

That's it...that's all we get about Anna Alma-Tadema. Yet I am fascinated by her. This "precocious teen" went on to paint a few more works I was able to locate on the internet, but not many at all. 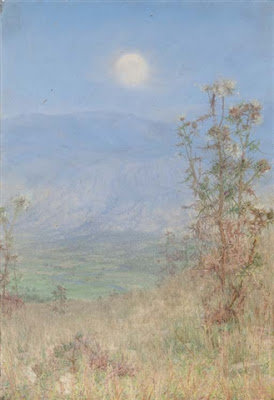 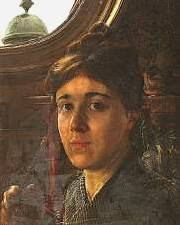 The same book I was reading also reminded me of the fact that Georgiana Burne-Jones, before marrying her famous husband, studied art at the National Art Training School, and was supported in her talent by Ruskin before she gave it up to focus on being Ned's wife. The book says:

The first 'female' government school of design was established in 1843; the Society of Female Artists was founded in 1856. Despite these gestures towards professional standing, women were less well paid for their efforts, and many a promising start foundered on the logistics of combining art with marriage. Edward Burne-Jones remarked: 'A painter ought not to be married, children and pictures are too important to be produced by one man.' Georgiana Burne-Jones studied at the National Art Training School in South Kensington, and was encouraged by no less a supporter than John Ruskin; but on her marriage in 1860 she said 'I stopped, as so many women do, well on this side of tolerable skill, daunted by the path which has to be followed absolutely alone if the end is to be reached.' A poignant memory of her exclusion after the birth of her first child stayed with her for the rest of her life.

'The difference in our life made by the presence of a child was very great, for I had been used to be much with Edward -- reading aloud to him while he worked, and in many ways sharing the life of the studio -- and I remember the feeling of exile with which I now heard through its closed door the well-known voices of friends together with Edward's familiar laugh, while I sat with my little son on my knee and dropped selfish tears upon him as 'the separator of companions and the terminator of delights.'

Poor Georgiana! And poor Anna Alma-Tadema. I could readily find even less information about her than Georgiana Burne-Jones, but at least some of Anna's artworks are remembered. As far as I know, none of Georgiana's are still around. How difficult it must have been to be a woman of artistic talent in Victorian times. It makes me respect Lizzie Siddal all the more for the determination she had to stick with her passion for art. Not to mention other famous female Victorian artists...artists like Evelyn De Morgan especially, who did not let the talents of her husband keep her from following the talents of her own.
Posted by Grace at 10:08 PM 8 comments: 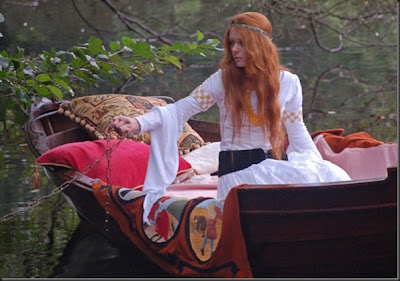 Although this information has been shared in several places already, I have to do my part to boost the signal of support for a woman who is an amazing cornerstone of the modern Pre-Raphaelite community, Stephanie Piña, creator of LizzieSiddal.com and Pre-Raphaelite Sisterhood.com. Stephanie's husband was recently in a terrible accident, and unfortunately is self-employed with no insurance.

Funds to help support Stephanie and her family can be sent to her Paypal address:
stephaniepina@lizziesiddal.com

Also, for the next few weeks, 50% of the proceeds toward purchase of the DVD from the amazing WAG Screen production of The Lady of Shalott will go toward helping Stephanie's family.