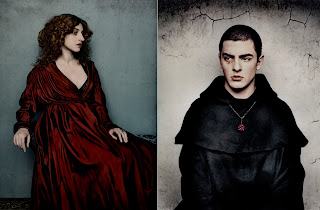 This photographer was featured recently on a favorite blog of mine, Ullabenulla's, and the above image looked so very very Jane Morris, I had to share it. 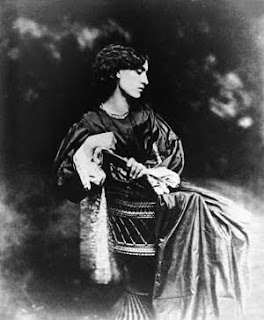 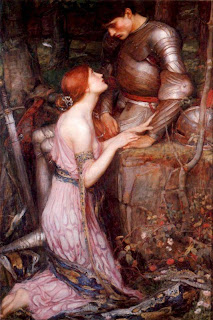 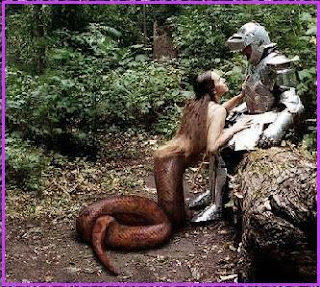 While googling the term "Lamia", I came across this image in a blog that fascinated me. I have no idea what it's from, since the original link no longer works. But it is a beautiful image reminsicent of Waterhouse's Lamia.
Edit: After a quick search, I found more!! Oh please check out this link for more gorgeous photographic interpretations of Waterhouse! (Saving images from the site is disabled, which I will respect and not repost here, but trust me...go look!)
Posted by Grace at 5:54 PM 5 comments: 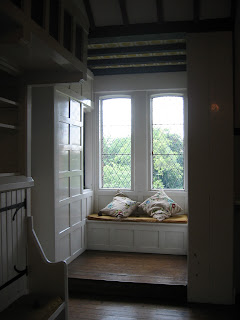 I truly love this photo a visitor* to Red House captured. I can just imagine William or Jane Morris stealing a quiet moment with a book or embroidery in this sunny corner. I love the way the lighting showcases the wear and character to the shining wood floors, and the corner of the giant settle with its iron hinges. I love the soft, casually-placed pillows on the padded bench. Click the image also to see a little bit of detail from the painted ceiling.
This is where I will be, in my mind, all weekend long.
*(apologies...lost the credit/link)
Posted by Grace at 10:49 AM 2 comments: 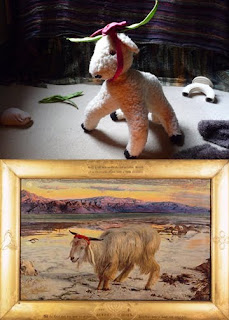 A Selection of Quotes 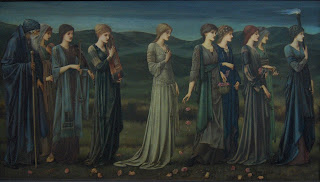 I'm still working on reading through The Memorials of Edward Burne-Jones. What a great book that is! I have to share a selection of wonderful quotes from it about Ned.

"Unmothered, with a sad papa, without sister or brother, always alone, I was never unhappy, because I was always drawing. And when I think of what made the essence of a picture to me in those days it's wonderful how little I have stirred. I couldn't draw people, of course, but I never failed to draw mountains at the back of everything just as I do now, though I'd never seen one." pg 8

But also it was with Edward then, as it continued to be throughout his life, that between work and work he felt as actual a necessity for 'fun' as he did for food and air. I can find no other word to describe a characteristic of him which will be recognized by every one who knew him. Gentle and lambent at times, wild enough and noisy at others, whimsical in words, ominous in silence whilst some swiftly-conceived Puck-like scheme of mischief took shape, carrying all things before it, compelling the least likely to join in it, always ending in the laugh that we remember, the cloud-scattering laugh! pg 19

Edward all through his life made little account of dates or ages: a friend was a friend, whether in the nursery or on crutches. pg 37

This habit [constantly drawing] continued as long as he lived; he must have covered reams of paper with drawings that came as easily to him as his breath. At every friend's house there are some of them. They filled up moments of waiting, moments of silence, or uncomfortable moments, bringing every one together again in wonder at the swiftness of their creation, and laughter at their endless fun. -pg 38

Then there were quiet times when Edward and Morris were alone and communed with each other in their own world of imagination. About this world which never failed him Edward once said, "Of course imagining doesn't end with my work: I go on always in that strange land that is more true than real." --pg116

When shall we learn to read a picture as we do a poem, to find some story from it, some little atom of human interest that may feed our hearts withal, lest the outer influences of the day crush them from good thoughts? When will men look for these things and the artist satisfy them? ... An artist should be no faint echo of other men's thoughts, but a voice concurrent or prophetical, full of meaning. pg 124 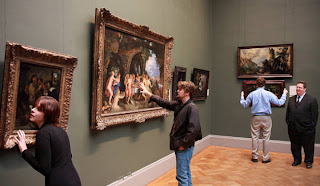 Today on The Onion, this article cracked me up so much I had to share it here.

"Hoping to boost attendance and broaden its base of supporters, the Metropolitan Museum of Art launched a new initiative this week that allows patrons, for the first time ever, to prod and scratch at the classic paintings in its revered collection."

"You can't grasp the brilliance of a great painting just by looking at it," said Phil Brehm, 32, who acknowledged that he hadn't set foot inside a museum since a mandatory field trip in high school. "To truly appreciate fine art, you need to be able to run your fingers over its surface and explore its range of textures."

"Or just rub your face all over it, like I do," Brehm added. 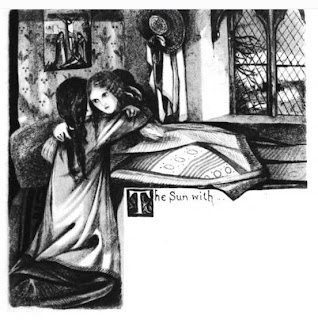 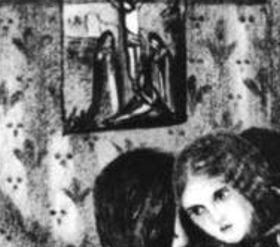 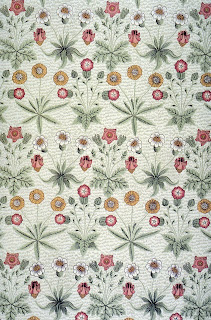 I've been reading The Memorials of Edward Burne-Jones by Georgiana lately. What a delight it is to read about Ned's life from someone so close to him! I'm relishing every detail. One thing I found especially sweet was an illustration enclosed that Ned did for a book called The Fairy Family. It was one of the first sketches he did around college age, trying to decide if he could really make a go of art for a living. And look...he included a pattern on her bed drapes that look quite a bit like William Morris' Daisy pattern! I'm not sure whether the chicken or the egg came first, but I always find it so charming to see bits of blending between the works of Morris and Burne-Jones...their friendship fused them together so completely.

Also, I have to share the beautiful words Burne-Jones wrote to a friend in college about Morris:

He is full of enthusiasm for things holy and beautiful and true, and what is rarest, of the most exquisite perception and judgment in them. For myself, he has tinged my whole inner being with the beauty of his own, and I know not a single gift for which I owe such gratitude to Heaven as his friendship. If it were not for his boisterous mad outbursts and freaks, which break the romance he sheds around him--at least to me--he would be a perfect hero.
How I am grinding you, poor fellow! well, briefly, come and see him and hear him, not in the smoke room or in disputations (the smoke room of intellects) but by the riverside and on the highways, as I alone have seen and heard him -pg 96