Some of you may already know about the Wombat Friday sensation that is sweeping the circle of Pre-Raphaelite bloggers of whom I'm fond.  It started when Stephanie Pina of the Pre-Raphaelite Sisterhood posted a photo of her wombat plushie on a Friday, and since then, numerous other dear friends who are respectable Pre-Raphaelite enthusiasts and scholars have bought wombat plushies and celebrated the end of the work week by photographing them in Pre-Raphaelite inspired ways.

If you wonder, why wombats? this wonderful blog by Kirsty Walker is a good primer.

All this to lead up to my first Wombat Friday entry:

I Cannot Paint You, But I Love You. 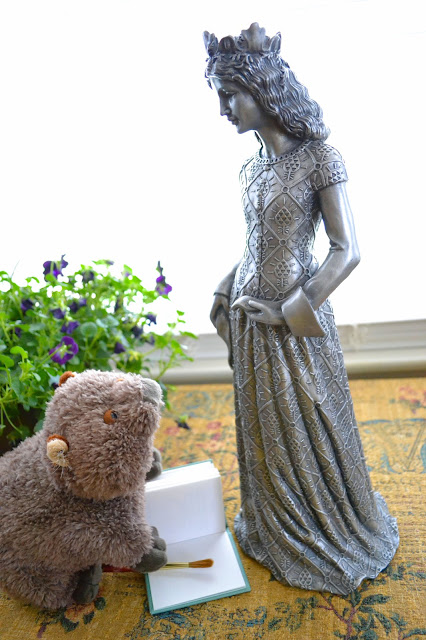 For the Briar Rose 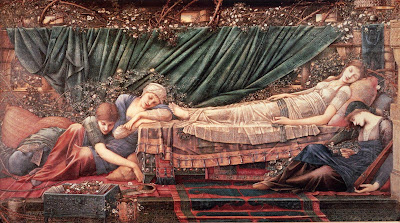 My two great loves are the subjects of my two blogs: the Mythic Arts and the Pre-Raphaelites.  When those two loves merge, which is in more places than one might first think, I am especially in euphoria.

Introducing the new book of short stories edited by Terri Windling and Ellen Datlow, Queen Victoria's Book of Spells.  I just finished the last tale in the book this morning, and let me tell you, they are all just excellent.   However hard it may be to choose a favorite among such outstanding tales, I have to say the award from me goes to the story "For the Briar Rose," by Elizabeth Wein.  And I am unashamedly biased on this front, as it tells the story of Margaret Burne-Jones through the metaphor/lens of the fairy tale of Sleeping Beauty.

Wein writes in her author note that she wrote this story almost fifteen years ago, and I find it especially telling that in her story, she talks about Ned Burne-Jones returning to a set of canvases he first started working on fifteen years earlier.  In both cases, with Ned's masterwork series of Briar Rose paintings and with Wein's story so delayed in publication, the subject matter is so timeless and so beautifully rendered, that a hundred years could pass in a night's sleep and we would never be able to tell for how fresh and lively the result.

I adored this short story, not only because Wein describes what life must have been like at the Grange, with a vibrant and spontaneous Ned and Topsy holding court over their guests and family, but also because she goes a step further, and gives real vibrant life to Ned's daughter Margaret.  She asks the question "what must it have been like to be on the periphery of these great men and their great works...to be flesh and blood of them, but still to be finding one's way through young adult life and one's place in it?"

I highly recommend the entire book, but I especially urge all enthusiasts of the Pre-Raphaelites to read this excellent short story.  With Elizabeth Wein's permission, here is a short excerpt to whet your whistle: 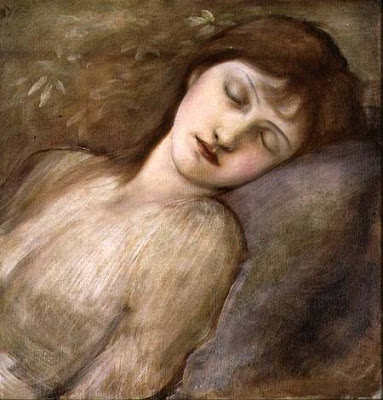 When Margaret came home from Scotland at the end of the summer, she found the Grange sunk in its own enchanted sleep, and its inhabitants become prisoners in the Briar Wood of her father's imagination.  Ned had begun work, again, on the paintings he had set aside fifteen years earlier, the lovely series of scenes from "The Sleeping Beauty."  The Grange was awash with sketches of slumbering young men and women, of designs for armour and studies of draped cloth; Margaret found, in a bucket in the kitchen, a length of wild rose stem as thick as her wrist and so fiercely barbed that she was amazed no one suffered any injuries in getting it there.

Ned led his daughter out of the house to show off his work-in-progress.  the Garden Studio stood between the little orchard and the road, a long building in whitewashed stucco with a few to the apple trees.  Ned used the Garden Studio for his larger canvases, and now an entire wall was taken up with the unfinished Rose Bower.  More studies for the series lay spread about the floor and tacked to the wallboards; and Margaret, even at eighteen, felt the odd excitement of being in a place properly forbidden to her.  Most of her life she had only ever been allowed in here to bring her father cups of tea or paintbrushes that he had left upstairs and needed in a hurry.

When she entered the little building, she had a sudden strange impression that she could not tell where the world ended and her father's paintings began.  Vagabond blades of unkempt, urchin grass had somehow managed to force their way through the earth packed between the red tiles of the steps leading to the furnace room, and pale tentacles of spindly, light-starved ivy were reaching through the narrow slit in the outer wall that Ned used to remove oversize projects.  It took her a few moments to sort out the proper and appropriate delineations: which was the common climbing rose at the studio window, and which the unreal enchanted briar caught on the unfinished canvas.

Margaret fixed her eye on the edge of the vast canvas and touched her father's sleeve.  "This is new.  I thought you were at work on the old series."

"I thought I'd start a new one as well.  That old princess was a wanton.  I'll have to get her deposed and replaced.  Think of it, lying there among her ladies-in-waiting with her nightdress all undone--what will the prince have to say about it when he comes to wake her up?  He'll beat his own breast and tell himself, 'Now, I'm not having any of this, thank you!' And be off to the next castle without even patting her on the head--"  Ned broke off and waved at the half-completed canvas.  "to say nothing of the damage it will do my reputation if people think I condone such behaviour.  Now this young lady will be a proper churchgoer.  No lying in bed for her on a Sunday morning--except, of course, after the enchantment gets her, and then, of course, she doesn't wake up for a hundred years..."

Margaret listened to his absurd familiar patter with only half an ear.  She was rather overwhelmed by the beauty of the tangle of thorns and shell-pink roses that pulled at the heavy, green drapereries of the princess's chamber.  She marvelled that such a proliferation of depthless, timeless artistry could emanate from her grey-haired and nonsense-spewing father.

Two serving maids slept in a peaceful heap on cushions at the foot of the princess's bed, affectionate and comfortable, one of them slumped luxuriously in the other's lap, like sisters or the closest of companions.  But a good third of the canvas was empty.

"Well," said Ned shyly, "I didn't like to start her till you were home safe and sound.  I wondered if you'd model for her."

"It won't be very exciting work.  You'll have to lie there with your eyes closed."

"But she should be waking up.  That's how the story ends."

"This will leave something to the imagination," said her father.  "You don't know how the story ends." 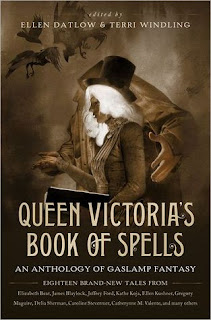