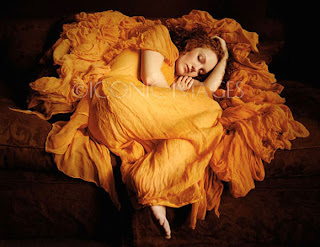 British model Ivory Flame is truly a modern Pre-Raphaelite stunner. Her looks, and her modeling work, take my breath away.

Click her name to explore so many beautiful pictures.
Posted by Grace at 11:54 PM 2 comments:

Oh my. I have a little bit of a backlog of things to blog about...I've been so busy I've neglected the site!

First, let me start with an addendum to the earlier post I did about the apparent Pre-Raphaelite aesthetic obsession with amber "hippie beads."

Although details are still sketchy about why the Pre-Raphaelites were so fond of these beads (it could just simply be that they were a reaction to the ornate jewelry of the time, the same way that aesthetic gowns were a reaction to ornate dresses), there were many wonderful comments given about the subject. If you missed the responses, here are a few highlights:

"I'm not sure about the rough-hewn wooden beads, but coral beads were very popular for young people, especially babies and toddlers, in the 19th Century as coral was believed to have protective properties against illness and evil. Often a child's first proper necklace would be made of coral. I'm not sure why they would have been appealing to Rossetti, although I did just now read that coral is supposedly good for a cure of a long illness. Makes sense for Lizzie! Or maybe he wanted to infer youthfullness?" --From Robin

"Sandalwood beads were thought to have healing properties as well as amber beads. Going way back, the nobility had gold and gemstones which the poor people wanted to copy so they actually painted wood beads to look like gold set with stones and later these beads alone became popular. When Europeans reached the new world, they found that they could trade glass and semi-precious beads with the Native Americans. These beads were found all over the world by traders and travelers from Venice to Africa. So, beads started to poor into America and what started as the poorman's version of good and jewels soon became worth a lot on its own-that is when we started seeing all the amazing beadwork done by Native Americans. Beads have ever since been a big deal and used as currency which is why I think they ended up as sign of royalty and used in so many costumes, fancy clothing and finally in paintings. That's all I know!" --From Merle

"I did not know that about coral, and it certainly makes sense. However, it makes me wonder if the use of certain colors on a particular figure is also a painter's device? The red beads help define a fiery spirit and lush, dangerous sensuality as depicted in Sandys' Medea, and on Rossetti's Monna Vanna just to cite an example. " --From Lisa

"I had a professor tell us that the red/coral beads signified a fallen woman, but that doesn't explain their overall significance or popularity at the time."--From Tara

Tara's comment actually leads me into this example, which Stephanie Pina, the awesome webmistress of the Pre-Raphaelite Sisterhood website, found for me. The artwork is "Thoughts of the Past" by John Spencer Stanhope, and I never noticed the "hippie beads" in this artwork, since they aren't being worn: 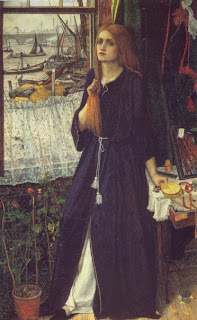 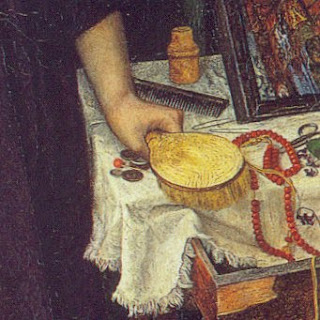 Tara, I think you hit the nail on the head for the symbolism of the beads, at least in this artwork. The painting depicts a fallen woman (what a shock...the Pre-Raphaelites so rarely painted those...) pondering her past during a moment of regret. The inclusion of red/coral beads is perfectly apt here. 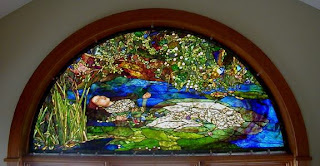 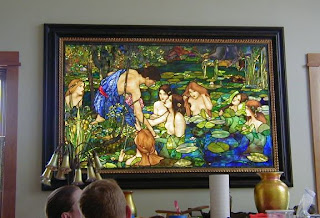 I featured Century Studios once before, but while perusing their blog for the first time in a while, I found a couple more images that just blew me away.

They are true stained glass artisans.
Posted by Grace at 8:09 AM 4 comments:

Of Changelings and Mermaids

First, apologies for my horrendous absence from The Beautiful Necessity! It seems time has slipped away from me lately, and all sorts of projects just aren't getting done.

Today, I wanted to share a post someone made on a LiveJournal group. I have her permission to share, and the rest of this post is quoted verbatim from her. All credit goes to LJ user daoinesidh.

If we recognize that there is a fictive element in all historical narrative, we would find in the theory of language and narrative itself the basis for a more subtle presentation of what historiography consists of than that which simply tells the student to go and 'find out the facts' and write them up in such a way as to tell 'what really happened'."

"... a beautiful romantic dream of something that never was, never will be - in a light better than any light that ever shone - in a land no one can define or remember, only desire - and the forms divinely beautiful ..." 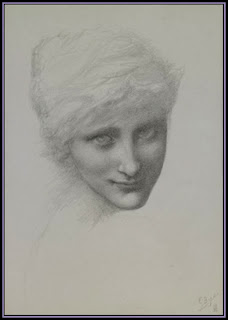 In 1883, the Pre-Raphaelite artist, Edward Coley Burne-Jones spent a short vacation at Walden, the country estate leased by his solicitor, Sir George Lewis. During this trip, as well as numerous other visits to the Lewis' London home, the artist formed a particularly close bond with the Lady of the house, Elizabeth Lewis, whose salons were famous amongst the prominent writers and artists of the late Victorian period. An intellectual and art enthusiast, Lady Lewis was a formidable and witty conversationalist, and Burne-Jones was not alone in his admiration of her. 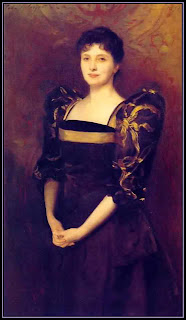 For several years of their decades-long friendship, Burne-Jones and Lady Lewis maintained a very active correspondence, a huge portion of which is stored today at the Modern Manuscripts Room of the Bodleian Library in Oxford. From his frequent and rather whimsical complaints regarding his work and health, to the heartbreaking confidences he sent her regarding the illness and death of his longtime friend, William Morris, Burne-Jones' letters exhibit the profound level of trust and respect that he had for Lady Lewis. He also sent letters for a short period of time to the Lewis' daughter, Katie, which were published by Macmillan in 1925 under the title Letters to Katie.

The following letter is a wonderful example of the many illustrated notes that Burne-Jones sent to Lady Lewis and her daughter throughout these years. In it he states: "My Dear Mrs. Lewis ... You see how hard I am pitching into my work - plunging into it ..." 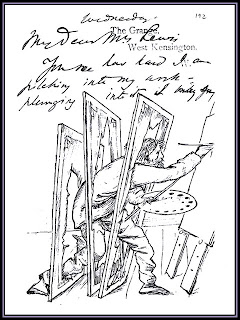 And indeed, he has already stepped through three canvases, and is on to his fourth. One can imagine the laughter this little sketch evoked, upon its arrival at the Lewis home.

In addition to these letters, the Bodeian also holds a number of other documents from Lady Lewis' estate, including a handwritten "memoir" that she composed for Philip Burne-Jones after his father's death. It is a lovely piece, full of sweet recollections of her many visits with Burne-Jones, including some very particular and interesting details about his stay at Walden in 1883. Here is a very magical bit of what I copied from the manuscript in 2005:

"When he was painting the Mermaid & staying at Walden we once went for a walk (in 83) through the woods of Fox Warren. As we passed one of the Keepers' cottages we saw seated on the rim of a hill a girl of about 12, a lovely creature with fair hair & gray eyes, slim & tall, dressed in a scarlet gown. She struck his fancy & we went near to try & get speech of her. But answer made she none & only looked up at him with a merry smile, not too shy to meet his eye but was much so to speak. She had bare feet & legs; he was as under a spell & when he came home at once made a drawing of her from recollection, just like her too; & he never altered it, but used it for the head of the Mermaid. After he spoke of her, said he felt sure she was a sprite & had come up from the hill. 'And oh! I do hope she will not come across my Phil some day and rob him of his peace of mind,' he would add."

The drawing at the beginning of this entry is one of many studies that Burne-Jones did of this changeling child, and the resemblance between her face and that of the mermaid in "The Depths of the Sea" (started in 1885 and completed in 1887) is striking ...

Lady Lewis finished her brief account of their experience at Fox Warren with the following recollection of an encounter that Burne-Jones had with the owner of Walden:

"Strange to say, he met Mrs. Charles Burdon (to whom the place belongs) at dinner at Ashley Cottage in 95 & asked her about the child. But she never knew or heard of a girl answering to the description & maintained, that the Keeper's own children were dark and plain. So he was more sure then ever, that she was a pixie."

An enchanting tale indeed; one can only hope that no historian will ever uncover any piece of evidence that might change Burne-Jones' vision of this mysterious fairy-like creature.

And who knows, perhaps the next time you happen to be strolling through the woods at Fox Warren, you will encounter an impish little sprite, wearing a red dress, barefoot no matter what the weather, and silently watching those who pass by. If you do, just give her a little smile, and then move on and stay quiet about it, for it is advisable not to disturb the inhabitants of Faerie, nor the peaceful rest of the artist who believed.