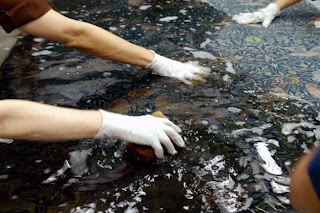 This is a  fascinating article on the process involved in cleaning an original William Morris textile (Bird design) for inclusion in the San Francisco exhibition of The Cult of Beauty.


Thanks to Bradbury and Bradbury's blog for linking to this article originally.

My husband and I, being good little Anglophiles, have a soft spot for British television.  Our most recent viewing experience was the exceedingly quirky yet somehow still amusing show, Snuff Box.  In the 5th episode of the show, there is a scene where one of the characters gets stuck in a loop making a toast.  My husband commented to me that he bet I loved the set where they were shooting.  I looked up from my laptop to see the most beautiful room covered in peacock blue gleaming tiles, with what looked to be a painted wildlife mural in Arts & Crafts style above it.

The room was featured twice more in the show, and both times I thought to myself "where in the world IS that place??  It looks peacock theme, but I know it's not Whistler's Peacock Room".  It was driving me batty, so I turned to Facebook with two clips from it I could find on YouTube.

(NSFW, and strange too)


You can see the upstairs of the place at 4:40 in this video:

Well my friend Michael Kaiser successfully identified the place!  Debenham House, also known as Peacock House.  It's a private residence, Grade One listed, and recently was on the market for 29 million pounds.  As I searched Google for information on the place, I discovered that not just the inside was covered in those beautiful liquid blue tiles...the *outside* of the building is covered in blue and green tile as well! 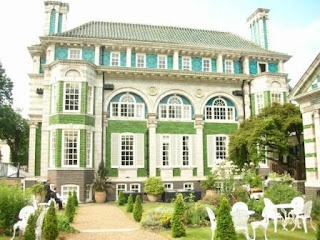 
"One of the most prominent features of the house are the colours and the use of Doulton Carraraware brickwork, of a pale terracotta shade, with panels of glazed brick and glazed tiles.  The tiles are wonderfully varied, depicting peacocks, eagles, flowers, galleons and mythical beasts. Many are reputed to have come from an assignment originally commissioned for the Czar's yacht Livadia, built in the late 1870's, and from another assignment for six P&O liners. The domed and galleried hall, at the centre of the house, includes brilliant mosaics, added later, to a design by Gaetano Meo and executed under his supervision. The design includes mythical and legendary figures, signs of the Zodiac and small portraits of the Debenhams and their children. The cupola itself is of leaves and branches in green and gold."  (via above link)

Even the bathrooms here are art! 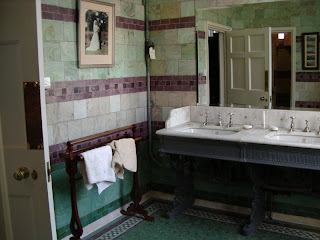 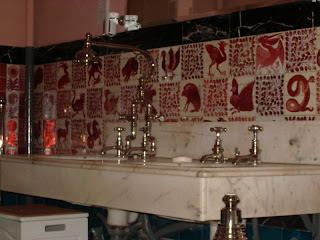 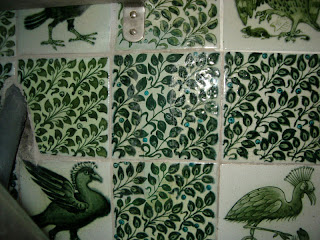 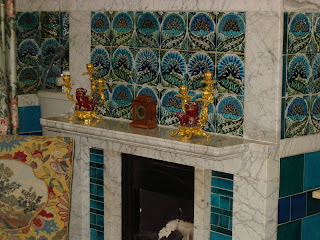 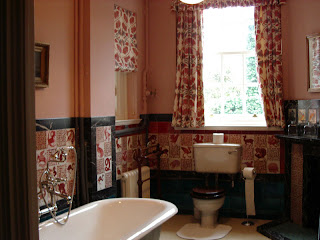 
A close-up on the outside of the building: 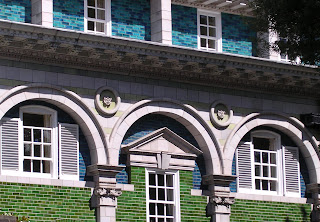 More close-ups.  Even the *chimney* is covered in tile.  So beautiful. 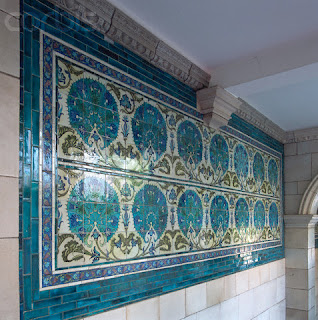 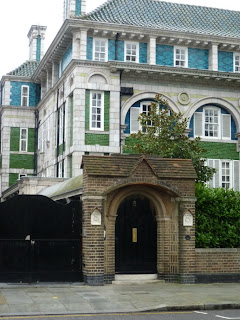 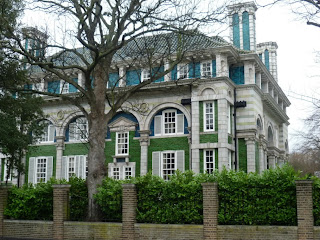 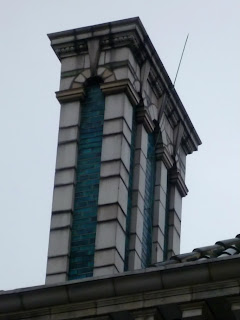 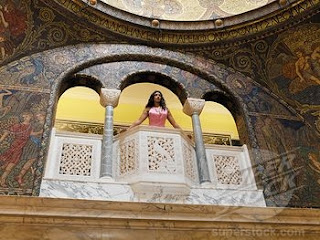 Sadly this is the only real image I could find of the inside of the beautiful main room of the house.  I would love to see tons of detailed photos of all those mosaics and murals!! 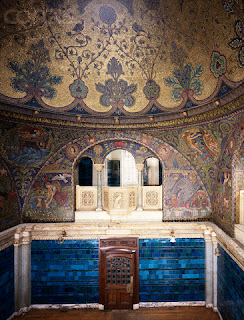 But at least here's a super short video someone took inside the space:

And a list of films you can watch to get a better look.

And an article about the place. 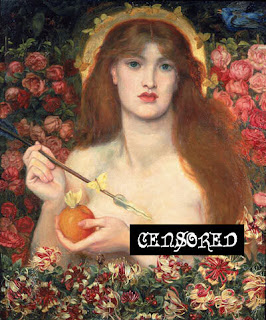 Like so many random wonderful things on the internet, I stumbled across this webpage entirely by accident, but I am quite intrigued by it.  Steven William Rimmer combines current event political commentary with Pre-Raphaelite imagery on the webpage Indecent Images.  He provides examples of Pre-Raphaelite images that could possibly, under recent potential legislature to censor the internet, be considered forbidden.

I am not a lover of debate, political or otherwise, and don't want to stir the pot, but I did find the idea of using Pre-Raphaelite art for current commentary to be quite fascinating!