Look for part 2 of my tour of the NGA exhibition in the next few days!  In the mean time, I give you a Wombat Friday special.

On my birthday last Saturday, my awesome Pre-Raphaelite friend Verity gave me a heads-up on this shirt available on the website Yizzam under the description "Mermaid Hugging Man."  I got a huge giggle out of that one, and Verity and Kirsty and I joked that all Pre-Raphaelite artworks should have literal titles.

Aaaanyway, I had to buy the shirt, and it arrived today!  Morris the Wombat approves. 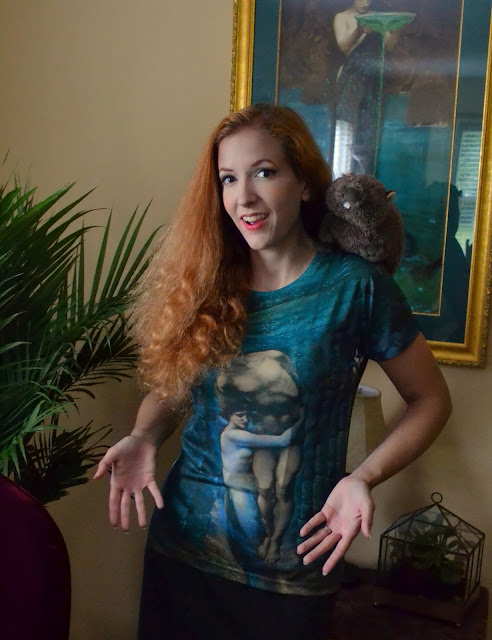 My favorite artwork on a shirt!  (In case you didn't know, the ACTUAL title is Depths of the Sea, by Edward Burne-Jones)  Life is good...
Posted by Grace at 9:00 AM 6 comments:

I have a confession to make: I avoided making this post.  Its been about a month since I went to the National Gallery of Art to see the exhibition of Pre-Raphaelite art there.  It was, despite my enthusiastic passion for the Brotherhood, the first time I've ever seen their art in person, and let me tell you it was overwhelming.

My friend Laurie dropped me off on Friday at the museum, and once I found my way around the building well enough to figure out where the exhibition was, I sat there in the atrium area right outside its entrance for a little while, gathering up energy and getting into the right mental state to tour the paintings.

In room one, my first reaction was overwhelming shock at the COLORS of the Brotherhood.  It's one thing to read in books about their method of painting wet on wet with a white background for greater vividness, and it's another to actually see it in person.  The first room was mostly full of large canvases with lots going on in the picture/multiple figures.  A good example of this was... 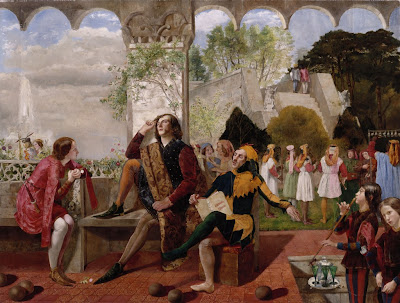 You're going to get tired of hearing this, but images online really don't do some of these artworks justice.  It was, actually, interesting to me to see which paintings looked pretty much the same as they do online, and which ones weren't done justice at all.  The colors in this were vivid as all getout, but the crisp lines of the details were what really stood out.  The jester's curlicue mustache was rendered no thinner than an eyelash, but with exacting precision.  The gargoyle statues on the stairs were crisply outlined.

In fact in the notes I took on the paintings, I almost wanted to look up a thesaurus for synonyms for the word "crisp"....that was the only word for the detail lines of the art....like an enormous HD television only even better.

In this same room, surrounded by opulent vivid colors, was Rossetti's The Annunciation 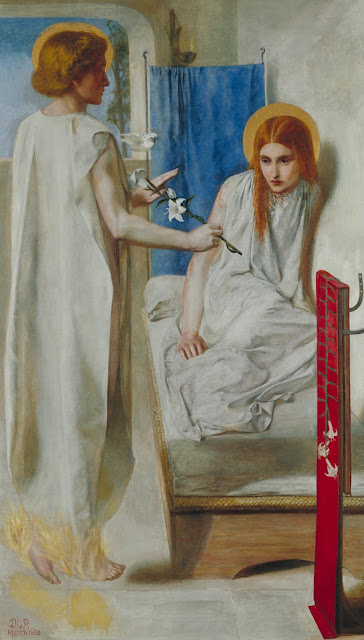 Ironic, since in its day it caused a bit of a stir for the way he painted Mary as afraid and unsure of her fate instead of divinely confident, it instead seemed at first unremarkable compared to the blaring colors of the other paintings in the room.  But the soft lack of color other than the cool blue of the background and the streak of red from the banner at front suits the mood of religious contemplativeness.

Right near Rossetti's painting was one of the most famous, and the one that caused the Brotherhood heaps of trouble when it first appeared...you guessed it, I'm talking about...

Christ in the House of His Parents by Millais.  (click through image to see much larger) 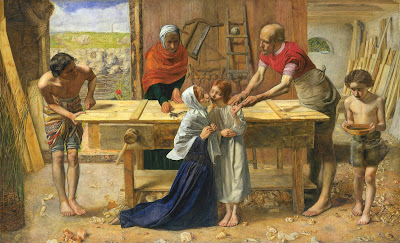 The first thing to strike me was the gorgeous pale blond of Christ's eyelashes.  Pale eyebrows and lashes are so very beautiful to me, and Christ's face and eyelashes are beautiful in a way that transcends gender.  But the details of this work, my word.  It really drives home why the contemporary Victorians were so shocked by it.  It's not just that Christ is a redheaded "street urchin" or that Mary looks like a real woman and mother.  Its every little detail of the painting that was painted like real people.  The woman with the orange shawl at rear has hands that are calloused and worn from years and decades of hard work.  Mary's hands have vivid veins in them, so real you can imagine her as warm flesh and blood.  And the feet!  Everyone has the sort of feet that really did go barefoot all the time, with callouses, hardened toenails, dirty skin...  I couldn't get over every little detail of this painting.

We will end for today with the first artwork from the second room...one that almost everyone just glanced right by, but that was a favorite in the whole exhibition for me.  (top ten at least)  William Morris' self-portrait. 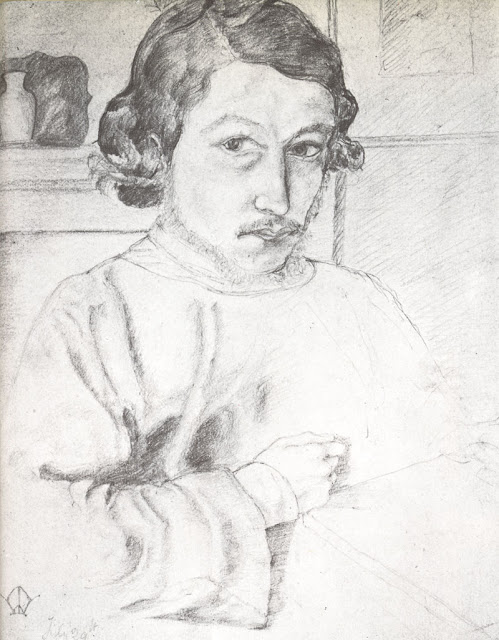 Oh I just wanted to give Topsy a great big hug after I saw this painting.  It's incredible how pencil works can seem so raw and immediate compared to finished canvases.  I honestly think part of my love for the pencil work of the Brotherhood is because of my love for THEM and their stories.  Their personalities come through so much more directly in their pencil work.  Seeing this sketch by a young William Morris, so hopeful and desiring of a life in the arts, you can sense his timidity in his lines and the expression on his face in the artwork.  For being known for his blustery and boisterous outbursts, I get the sense that Morris really was in some ways an exceedingly shy and timid man, who had to push past his feelings of self-doubt to become the epitome of a renaissance man as we know him now.  That really comes across in this piece.  The terribly drawn lips, like a pair of green beans on his face, the lopsided eyes...and yet here's the bit that got me grinning: look at his signature.  It's absolutely gorgeous in its architectural rendering, and in the original its the part that is done with the deepest and most confident lines.  I just want to take him by the hands and say "oh Topsy, no, you're right...that sketch really didn't come out how you had hoped it would, but LOOK, oh just LOOK at your signature.  You have an eye for art indeed, you just have to find your own place..."


In the next installment, room 2 including the brightest most gorgeous purple I've ever seen in a painting, another painting that looks like a pastel tinted black and white photo, and a woman with an unnerving blank stare.....