The last of the awesomely wonderful Raine cartoons...for now at least!

This one's my personal favorite because...well...because it's Ned and Topsy, acting totally how I imagine them. 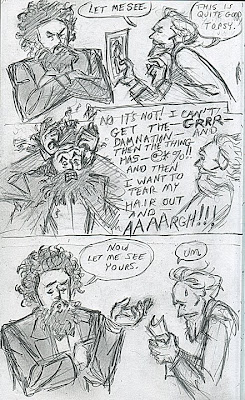 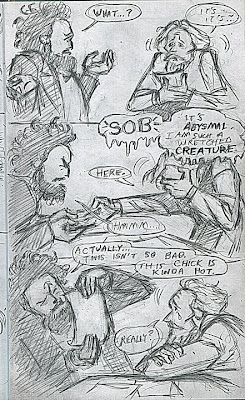 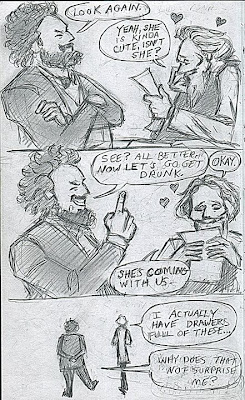 Power to the Sisterhood

Part #2 of the amazingly awesome cartoons of Raine Szramski's. I suspect Stephanie Pina of the Pre-Raphaelite Sisterhood will especially love this one. 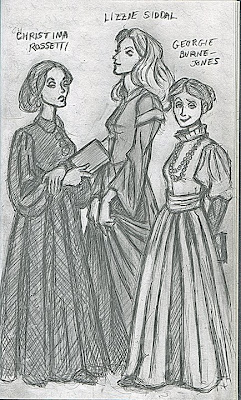 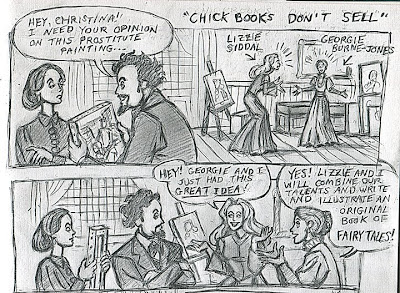 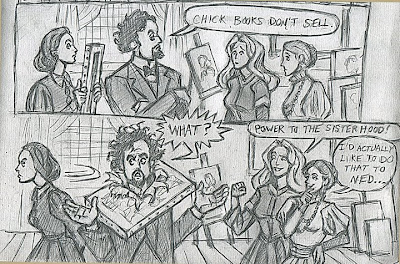 This Will Make Your Day

A couple of days ago, I got a friend request from a gal on Facebook by the name of Raine Szramski. When I saw we had numerous interests in common, I friended her and started looking through her galleries, as I saw she had been an art student. Then...I came across a folder that absolutely made my day, and continues to, every time I look at these images.

These, my dear readers, are Raine's cartoons of the Brotherhood. And they are wonderful. 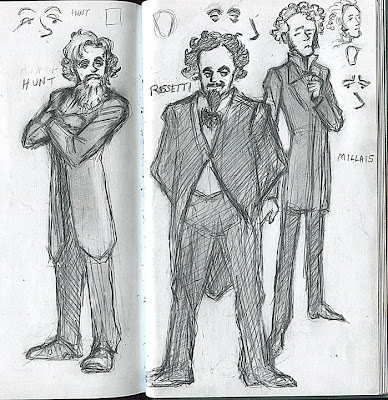 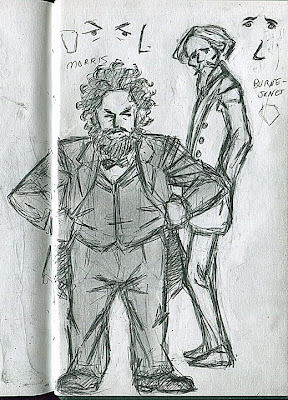 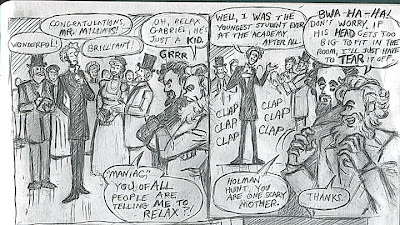 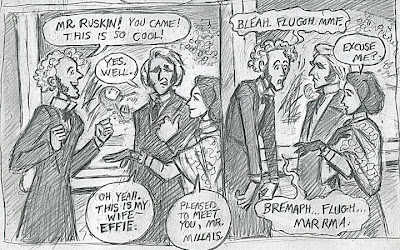 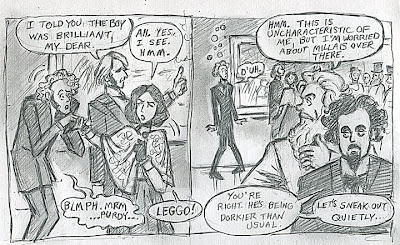 There are more of them, and I will post more in a separate posting. These are just too wonderful to share all at once, and must be savored.

Personally, I kind of want a t-shirt with Ned and Topsy's portraits on it. 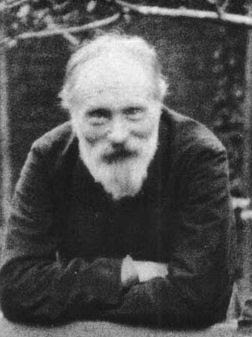 Edward Burne-Jones, or Ned as he was known by his friends, is my favorite Pre-Raphaelite. Not only do I appreciate the dreamlike quality to his artwork, but I am also (and frankly even more so than his art itself) fascinated by the man. He seemed so enigmatic and mysterious, soft spoken and shy, and yet he had such a deep and fantastical inner landscape upon which he drew for his ethereal canvases.

I'll admit to a bit of a bias about Ned's life. My fascination with his character helps me excuse some faults that should perhaps not be excused; namely his affair with Maria Zambaco, and his chivalric love-filled letters to various young stunners during his older years. I explained the adoration he felt toward these women in the context of his love of Arthurian knights and romance. His feelings toward them were simple chivalry, I told myself. The truth of the matter is probably a bit of my belief and a bit more complex. It is hard to deny, for instance, the inherent sexuality of this sketch Ned drew for one of his adored young ladies. It shows her luxuriating in a bathtub: 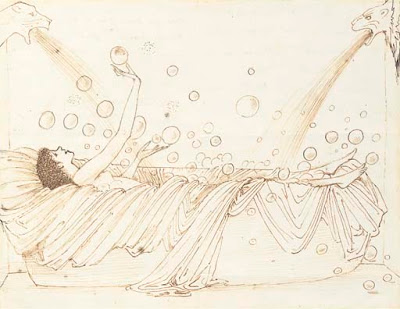 Less risque but also intimate are these sketches of the same stunner relaxing in bed doing embroidery. 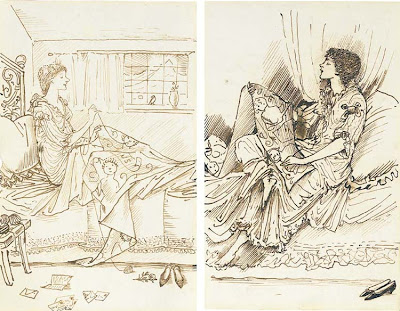 And then there is this astonishing sketch Ned did of himself and best friend William Morris in a steam bath, shared by the wonderful Pre-Raphaelite Passions on Facebook. I had no idea Ned had ever done a naked sketch of himself!!! 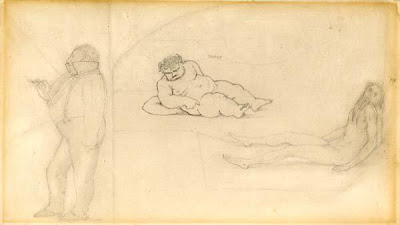 There is a new biography that has been the talk of the Pre-Raphaelite-obsessed community. Fiona MacCarthy has written what appears to be a very well researched biography of Edward Burne-Jones. We are all dying to read the new book, which is set to be released on September 1st in England (sadly, no release date known yet for the U.S.). From a few articles I've read in which MacCarthy talks about Ned, it sounds like she will not shy away from discussion of his intriguing and enigmatic sexual and romantic escapades. 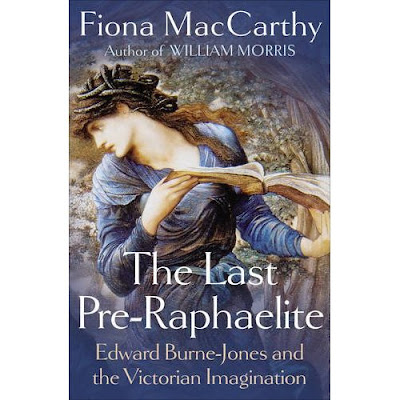 Edward Burne-Jones...a fascinating man, whose life I think I could study for the rest of mine and still not tire of it. Today is his 178th birthday. Today we celebrate the man of such imagination, dream, talent, and desire. 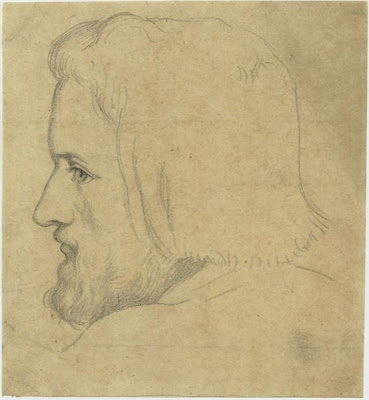 A sketch of young Ned done by Rossetti. Also shared by Pre-Raphaelite Passions.

So, I work at a library, and I am a huge, huge fan of my job. I am also a huge fan of libraries in general...I practically lived at them during my growing up years, I read so often.

There is a great new campaign from the OCLC called Geek the Library. It's a fun promotional campaign to show the public that no matter what the thing is that you are most passionate about in life, the library can help you in pursuing your enthusiasm. Toward that end, library employees were encouraged to create their own posters sharing what they personally "geek."

Well...are you ready to see mine? Please try to contain your shock. I know it's an entirely unexpected choice. 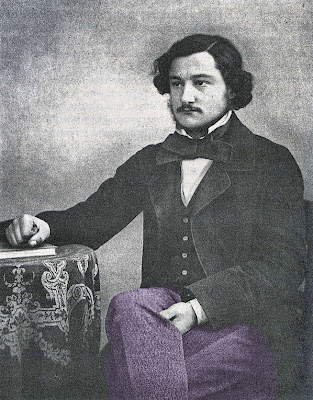 One thing I love about my love for the Brotherhood is how many throwaway lines in biographies give me a tickle that keeps me in a good mood for days.

In this case, I am reading a biography of Edward Burne-Jones, and I found out in a tossed out line that when he and William Morris started a magazine in college, Topsy bought himself a pair of purple trousers.

Now I can't help but imagine that the pants in this photograph are actually a gorgeous shade of my favorite color. 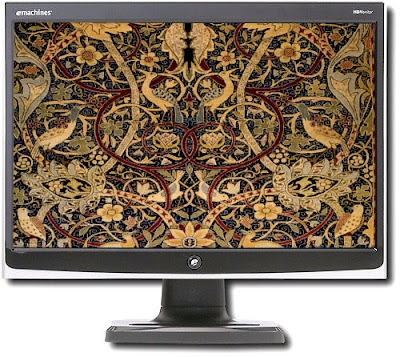 From my recent silence on this blog, you would not be to blame for suspecting I had abandoned our beloved Brotherhood entirely. This is, however, not at all the case! As has become the norm for so many things, much discussion has instead been moved...to Facebook. The Beautiful Necessity does not yet have a public fan page on there (though perhaps I should make one?), but here is a short list of public pages I highly recommend you peruse and "Like" for a plethora of Pre-Raphaelite Pretties.

Pre-Raphaelite Passions is impressively steady in their stream of stunning and fascinating images and discussions.

Pre-Raphaelite Sisterhood is the fan page for the phenomenal blog, and of course is a must-Like page. She has also started a brilliant Pre-Raphaelite book club. The current book is Malory's Le Morte d'Arthur

William Morris is a fan page that also posts an impressive array of gorgeousness.

William Morris Gallery has a fan page as well...great stuff.

Red House 's fan page is extremely exciting, seeing all the things they are uncovering and changing at the famous home of William Morris.

John William Waterhouse Monument Restoration Appeal is a great cause, and a good place for people with the common enthusiasm for Waterhouse to gather.


That is just a small sampling of the Pre-Raphaelite beauty available on Facebook for your every day admiration. So go! Explore! And please, if you know of more pages you highly recommend, share them here.