So where did we leave off?  Ah yes...I hadn't gotten very far, had I?  So far we've only ventured into the first room of the NGA exhibition of Pre-Raphaelite art, and stepped into the second room to admire the wall of portrait sketches.

The Huguenot by Millais

Honestly out of all of the artworks in the whole exhibition, this was a strong contender for the most "wow" factor in person compared to online images or reproductions.  The absolute precision in every line, the color.  I saw the painting and the first thing I thought was "PURPLE"....the purple of the man's jacket is basically like the god of all purple...a rich rich rich rich shade that could be the god from which all other purple objects spring.  Hyperbole, you say?  Hmm...see it in person and then tell me what you think. 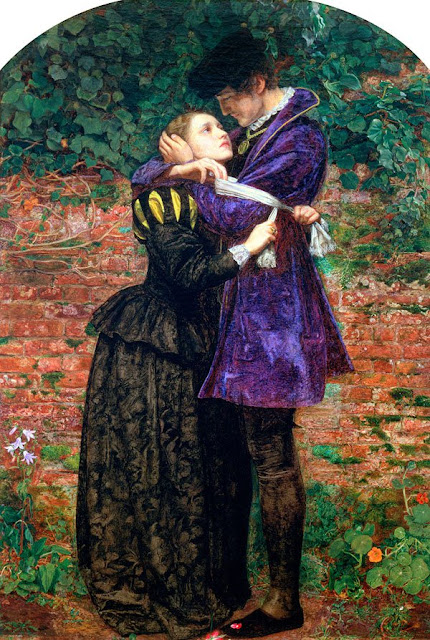 Another thing that struck me in this painting...do you see the gold cording along the top of the man's collar?  I've hardly ever seen anything more realistically rendered.   In person, it was almost three-dimensional, a hair-thin crisp line of rounded gleaming gold paint that immaculately cut across the canvas.

And can we just talk about their expressions? 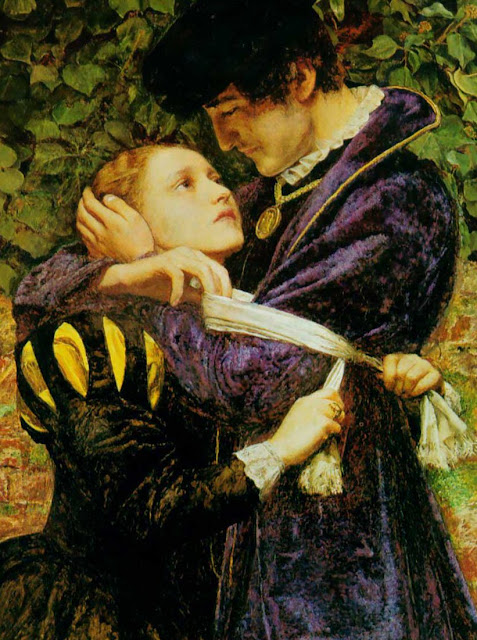 This was the first image in the exhibition to really drive home to me the fact that art has a spirit to it.  It's not just about the physical renderings on canvas...there is a palpable energy to the art in person that reproductions just cannot capture.  For instance with this image...I felt like I was intruding on a personal moment.  The female figure's eyes are filled with gleaming tears about to overflow onto her cheeks, and you can imagine from the gentle adoring love on the man's face that when that happens in the next few seconds after this captured moment, he will lift his hand from her hair to her cheek and gently stroke them away, shaking his head as he pulls the sash from his arm.  Art like this is so much more than just a still image.  It's an entire story.

So the next artwork to catch my eye was The Death of Chatterton.  I've heard my British friends titter about how lovely this artwork is so I was curious to see it in person, as images of it never struck me as especially appealing...Pre-Raphaelite images of people already dead seemed a bit creepy to me.  And yes, that arguably includes the famous Ophelia, but we'll get to her.

So Chatterton.  I tried to find a good image of it online, but you know...I don't think one exists. 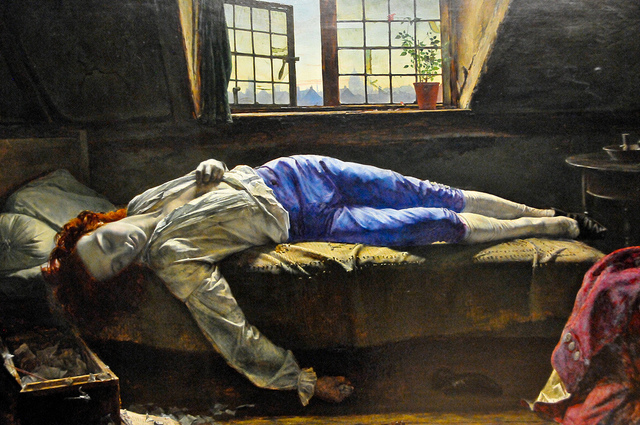 And okay, ladies, now that I've seen it in person I admit I can see what the fuss is about.  It's not so much the beauty of the central figure to me, but the brilliance of the color scheme.  In person, the art strongly resembles a hand-tinted black and white photograph, with its utterly shocking neon orange-red hair against the pale bed linens.  The face is done in a pale version of the same pallet of purples and grays as the vivid pants he wears.  Your eye is first drawn to the central figure with his angelic face and incredible hair, and then drawn upward to his view of the smoggy dreary city.  The symbolism of the flower struggling to grow and thrive in the lack of direct light is palpable as you view the image.  Once again, in an exhibition of gorgeous color, the subtle use of it here really is admirable.

Next was Millais' Order of Release.  I'll be honest...like portraits of dead bodies, one thing that always tends to make me ambivalent about an artwork is a vacant stare in a situation where one isn't warranted.  It's one thing for a solo portrait of a woman to feature her staring into space with a dreamy look on her face, it's another thing for the same look to be on the face of a woman who is supposed to be paying attention.  For this reason I've never much cared for The Order of Release. 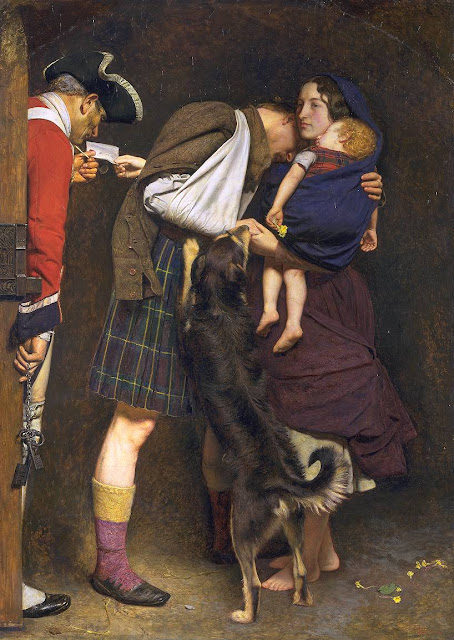 Sadly, seeing it in person didn't make it grow on me.  It's beautifully painted.  But...where is that woman looking!?  Not at her baby.  Not at her husband she just got to see again after goodness knows how long.  Not even at the man at whom she's thrusting a piece of paper.  But she stares vacantly with a mild look of bemused relaxation at a spot on the wall behind the soldier's door.  Um...huh?


Ironic, considering that this is the same artist who put such potent emotion on the faces of the lovers in The Huguenot.

EDITED TO ADD: Okay, I've had a few people give me their interpretations of the female figure's blank stare, and I have to admit that its given me a new respect for the painting.  I still find it a bit unsettling, but apparently that may have been an intentional decision by Millais.  Please read the comments below for excellent interpretations by several marvelous people.  Thanks all!

The next artwork to really strike me was Hunt's Portrait of Henry Wentworth Monk.  I'm not the biggest fan of William Holman Hunt.  All of the Brotherhood had a rather signature style of painting people, and I've just not much cared for his.  But the color in this painting is magnificent, as is the bold approach of a huge portrait of a single figure, after seeing so many elaborate canvases with multiple figures.  I only found one image of this painting online. 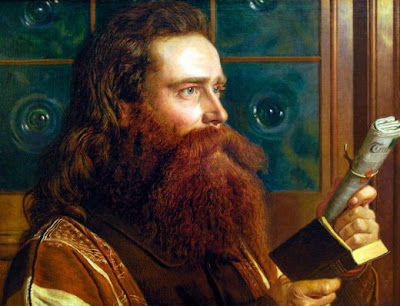 I was also charmed by the contrast of this figure holding a holy book and a newspaper.  But mostly I just adored the colors.  Oh they are so lovely in person.

Rossetti's Found was the next piece to catch my attention.  It's hard to say here how much of the feeling of this painting was because of what I know and think of it, and how much was the energy the actual painting was exuding, but I really felt bad for this well-done but unfinished canvas.  I felt like Rossetti approached working on it with the same emotions the central male figure has on his face.  The man's expression looks a little...well...lost.  Like he's not sure what to think of the melodramatics of his fallen love, or what he should do next. 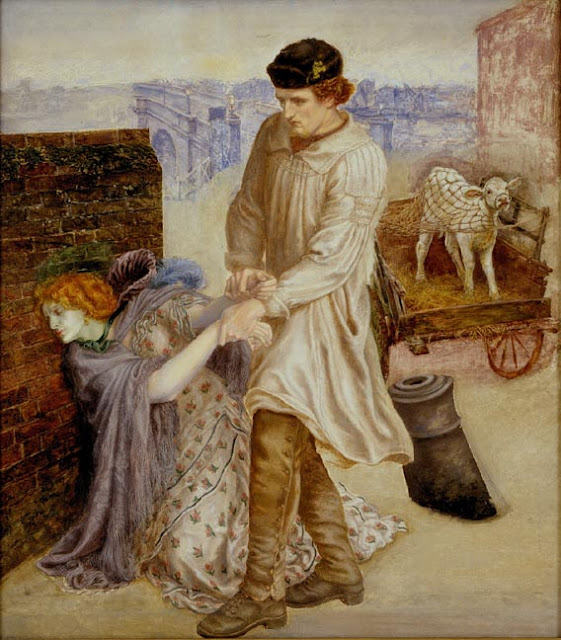 When Rossetti started this painting, he had a clear cut moral opinion of the shame of a fallen woman.  Ironically, the woman in this very painting, Fanny Cornforth, taught him about the lustful rich full-bodied enjoyment of life that some "fallen women" celebrate.  And I'm sure it was difficult to return to this painting of her looking so ashamed at her sexuality...something he had come to realize could be a celebration.  And so the painting remained unfinished forever.

And Rossetti moved on to his luscious sensual-lipped women.

About whom we will definitely chat in an upcoming post.

Next time: two artworks, two artists, one dress.  How embarrassing!