Have you ever had a really long, involved, practically epic blog post or piece of conversational writing in mind, and because you just never seem to end up having the time to do it, you end up not writing anything at all?  And then its been so long it's awkward...

Last spring, no, not 2014, but 2013, I went to the Pre-Raphaelite exhibition at the NGA in Washington D.C.  And it was an amazing experience.  It was my first time seeing these artworks I so adore in person, and it was truly almost a religious pilgrimage to me.  I wanted to do a series of blog posts talking about all my experiences at the exhibition and at the Delaware Art Museum.  But then things got busy and one month led to another...and I never got around to it.  But there are things I really wanted to say!  So I decided that there's no time like the present to at least start giving one or two highlights from the experience.

I had to share a fun little detail from the National Gallery.  Honestly, and totally unexpectedly, in the room where Millais' Ophelia was triumphantly displayed in all its glory, I found myself drawn more to this artwork, Rossetti's Salutation of Beatrice.

You see...all of the artworks, every single one, familiar or unfamiliar, was a thousand times more stunning in person than even the most accurate of online images could show.  But some were more surprising in their beauty than others.  We've all seen Ophelia.  We all know the intricacies of the flowers scattered on the water's surface, the murky river reeds.  But then there were artworks like this, easily admired and then put aside when perusing online collections.  But in person...oh in person, the colors...the glowing, radiant colors so vivid and vibrant you felt like you should hold your hands out to it for warmth.  The frame...the shining glowing wood frame, like the tree it came from was beaming with pride at the beauty it had been transformed into.  The whole thing was just breathtaking to me.

But I digress from my point.

Across the room from The Salutation of Beatrice was another artwork we've all seen before...William Morris'  La Belle Iseult. 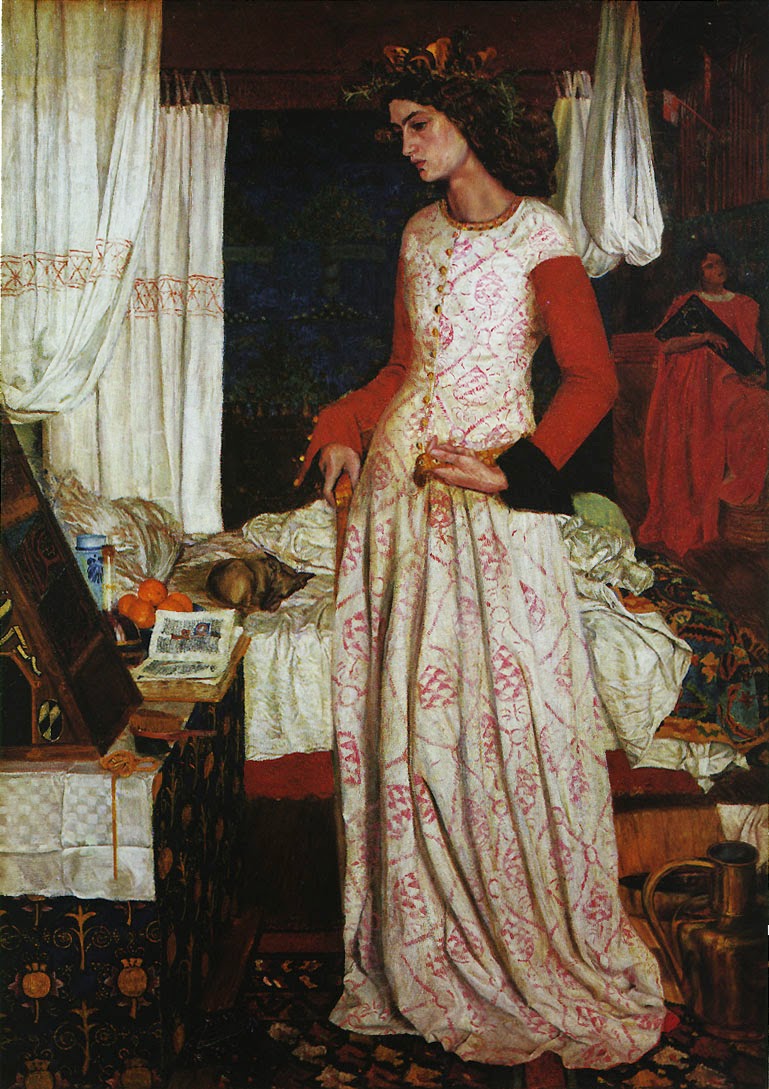 This was also lovely in person, but not quite as stunningly so, perhaps because Morris never really quite got the "glowing colors" thing down in his paintings (but more than made up for it in, oh I don't know, a trillion other talents).

Wait a second...I thought to myself, peering at the familiar figure of Iseult.

I walked back across the room diagonally, looking at Beatrice.

I walked back across the room and looked at Iseult.  After three or four times doing this, I think the security guards got a bit antsy.

But sure enough, there it was...the same gown used as reference in both paintings.  Oh sure, the colors had been changed, and the sleeves were patterned in one and solid in the other, but there was no denying that one-of-a-kind pinecone and circle-punctuated gridmark of diamond lines on the gowns. 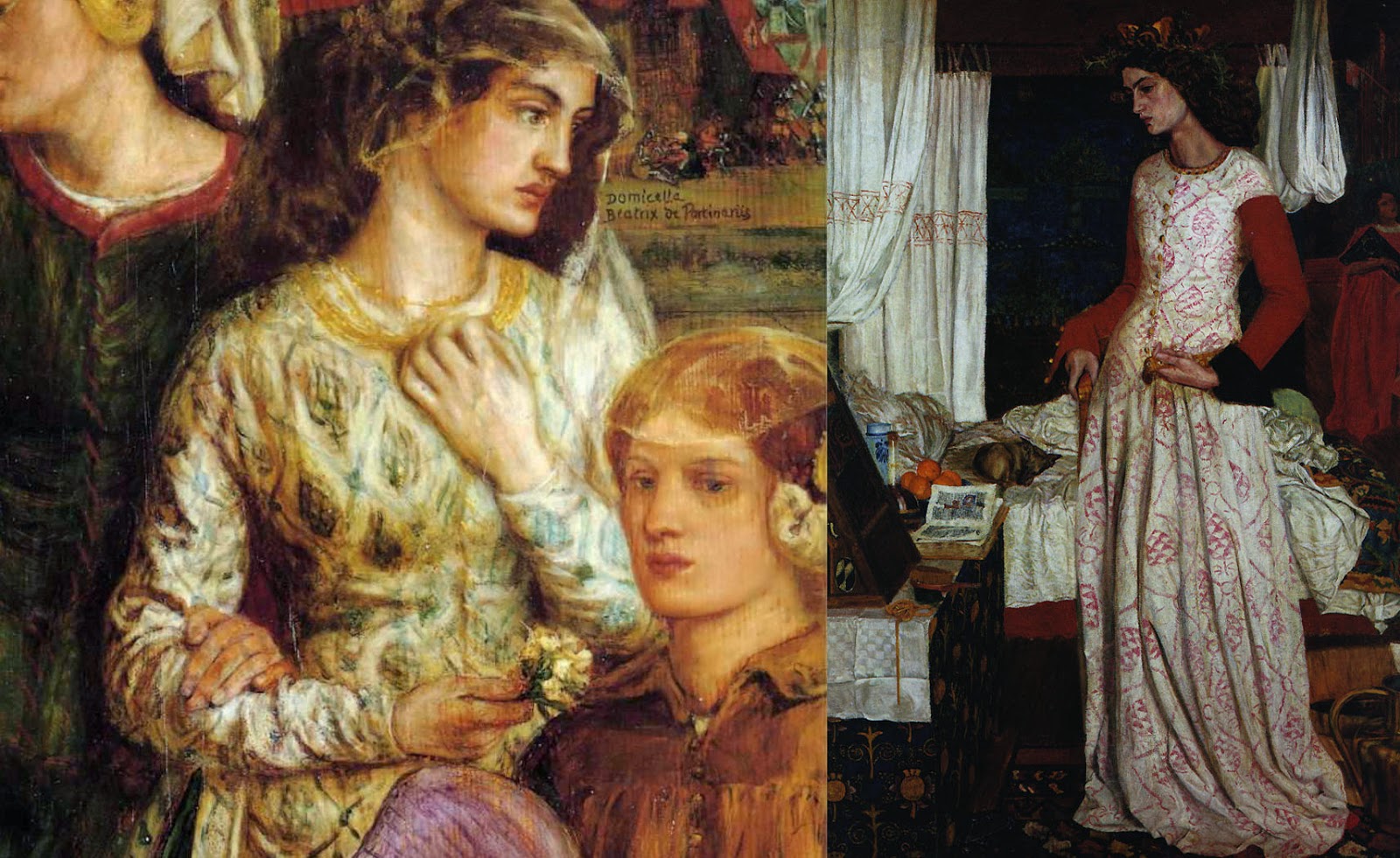 Sadly, this was the best version of Beatrice I could find online, but trust me...in the actual outfit the design is far clearer and more distinct.

Like a modern day costumer who finds a dress reused in two movies, I always get a huge tickle out of discovering props or costumes reused across Pre-Raphaelite artworks.  I recall seeing the same gown used multiple times by the same artist (Waterhouse, anyone?) but I can't recall ever seeing the same gown, modeled by the same woman, in two artworks with two subjects, by two artists.

It's just a little tidbit, but I didn't want to wait any longer to share it, as it gave me an inordinate amount of amusement and excitement to discover.  Was it just coincidence that the gown was chosen for Jane to wear by both artists?  Both paintings were done early in their careers...perhaps they were limited in their wardrobe options that early on.  Or perhaps this is a subtle little sign of the quiet competitiveness between Rossetti and Morris, an ironic symbol when worn by the woman who would eventually be their greatest source of conflict (to what extent real or later imagined by scholars we may never fully know).

Who wishes this gown still existed?  And indeed, perhaps in some dusty attic of some random rowhouse in London, this gown sits, folded and tucked away in a chest.