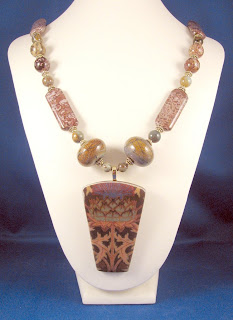 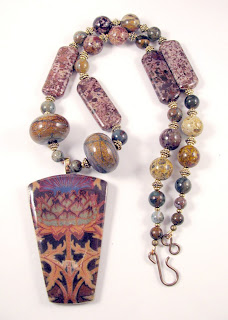 Happy belated Thanksgiving, fellow U.S. people! I'm recuperating from a flu/cold thing, thus the silence. But my regular search on Etsy for keywords last night came across this necklace I thought was too lovely not to share. It uses an image transfer of William Morris' Artichoke pattern, and is definitely one of the more beautiful pieces I've seen that transform his work into jewelry form.
Posted by Grace at 10:15 AM 1 comment:

The Pre-Raphaelites and Norman Rockwell 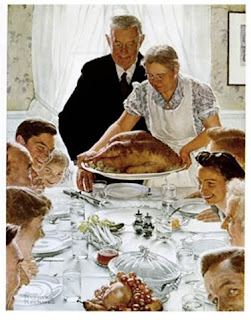 Say what? At first the two subjects may seem strangely random. What would they have in common other than the general fact that both are art/artists?

There is a new book out on the subject of Norman Rockwell...specifically, his use of meticulously posed and copied photographs to create his work. Looking through the sample pages from the book made me remember how enchanted I was by Norman Rockwell's art as a young woman. The narration of his work, and the way it always seemed like a captured moment, slightly exaggerated for dramatic license. Sounding familiar yet? Although the Pre-Raphaelites often focused on medieval subject matter, and Rockwell's art focused on the every day moments in family life, both of them often had, as a main purpose, the goal of embodying an emotion. And both Rockwell and the Pre-Raphaelites would focus on every little detail of the image to make sure it had some bearing on this purpose. 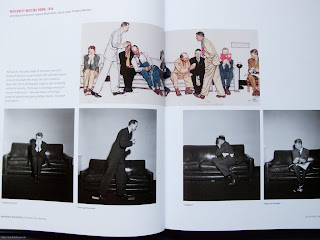 Both Rockwell and the Pre-Raphaelites have been subjects of a struggle in the art world to determine if their art is truly "fine art," and both for similar reasons. Art critics sometimes dismiss Rockwell as being too narrative...too illustrative. The Pre-Raphaelites were so adamant about realistic details in their art, they would purchase costumes and accessories, and spend long hours outdoors trying to capture scenery. By the time Rockwell came on the scene, photography had advanced enough that his meticulous posing of his models could be done all at one sitting, with a resulting photograph forming the starting point of his artwork. But even in the early days of photography, Rossetti was having Jane Morris sit for him outside in his garden, to take photographs for future reference. 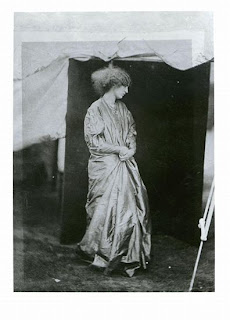 Critics sometimes complain that the art of the Pre-Raphaelites, and also Rockwell's art, are not only too illustrative, but too precisely photographic. After all, why not just take a photograph for the same result? It only takes a few glances back and forth from Rockwell's reference photos to his finished art to see what makes his art special. It's remarkable...often times, the figures are rendered in the art precisely as they are in the photographs, down to the last wrinkle of the shirt. And yet under his expert hand, the photographs are transformed into an inescapeable composition with a definite mood. By imperceptibly lowering a girl's chin a few inches, and having the waiter lean in a few inches closer, the entire composition is perfected. In the same way, although the Pre-Raphaelites painted stunningly realistic images, I suspect that if we were able to find photographs of their models posing for the works, we would find subtle ways in which they changed the composition, the angle of a hand, the tilt of a chin, that improve upon the original pose ten-thousandfold. 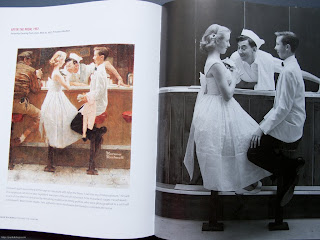 Norman Rockwell was born during the end of the 1800s, during a time when Pre-Raphaelite art was still alive (though on its last legs). As he grew up, he saw the emergence of more and more stylistic and abstract forms of art, but his work was relentlessly realistic, emotional, and heartfelt. In his own way, like that of the Pre-Raphaelites in the previous century, he rebelled against the work that other artists were doing, and paved his own way towards his own artistic goals. 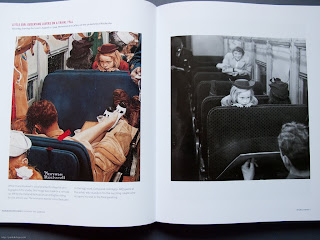 In an essay written for an exhibition at the Nassau County Museum of Art, Charles A. Riley II, PhD wrote "Rockwell was not a static historicist. He offered visual ballads to the present as he saw and heard it. ... Rockwell's plangent tone...delivers its emotional punch straight to the heart even in an age as cynical as ours. Nostalgia is nothing new in art history. The Victorians excelled at similar evocative realism, and there is more than a passing resemblance between some of the Pre-Raphaelites and Rockwell's narratives, especially the more ambitious paintings. ... It is important to acknowledge, however, that the nostalgia bathing the Rockwell scenes may well be a golden light we cast ourselves -- in his times these were mirror images of the present."
This is an important reminder also for many of the contemporary works of the Pre-Raphaelite that we now look at with romantic notions.

So...the Pre-Raphaelites and Norman Rockwell both used photographic precision to create extremely detailed works of art that were narrative, romantic, emotive, and often sentimental. Artworks like The Awakening Conscience and The Problem We All Live With both dealt with current world issues of their era in an emotional way, but without directly being crude or blunt. 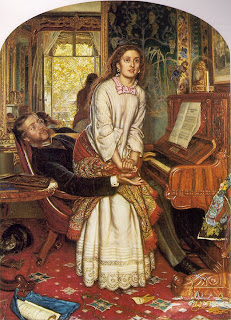 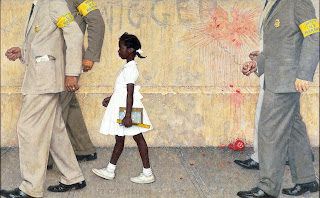 And both Rockwell's art and that of the Pre-Raphaeltes now, because of their sentimentality, are often framed on walls and admired as just "pretty art" or "sweet art" when really, they have far, far more to tell us.
Posted by Grace at 9:23 PM 1 comment: 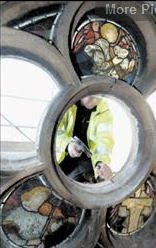 Thanks to Cathy Baker for this link.

VALUABLE stained-glass windows at an ancient Moray chapel were yesterday being removed as part of preparation work for the Fochabers bypass.

The world-famous pre-Raphaelite windows at Gordon Chapel at Fochabers are being removed and stored by the Scottish Glass Company to save them from being damaged during the work, which will speed up traffic on the A96 Inverness to Aberdeen road.

The windows were designed by Edward Burne-Jones and made by William Morris and Company.

Although they were not part of the original design of the Gothic-style chapel, which was built in the 1830s, they were added between 1874 and 1919. Each of the windows commemorates a member or members of the Gordon Lennox family. The modern St Andrew window was added in 1990 to commemorate Sir George Gordon Lennox.

During the bypass work, which is expected to take three years to complete, tough plastic sheeting will be used to cover the gaps in the stone frames.

The windows are expected to be put back in with a special acoustic protective layer.

A major six-month refurbishment of the chapel, including a new roof and repairs to stone work, is due to start soon. Services will be held in the rectory underneath the church in the meantime.

All credit for today's blog goes to Jen Parrish, who found and compiled these images. Check out these gorgeous Pre-Raphaelite-style photographs from Model Mayhem! 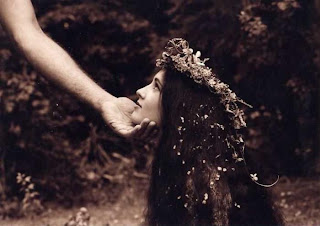 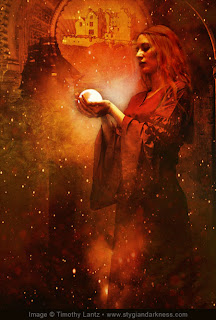 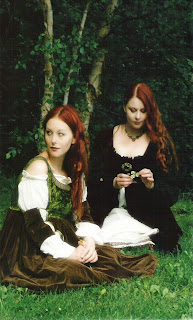 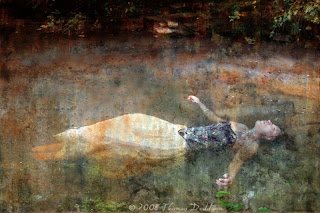 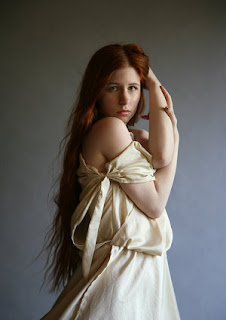 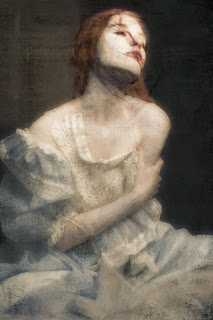 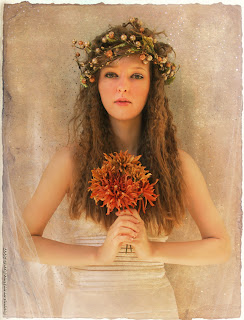 First there's RoseOak, who has several items inspired both directly and indirectly by artwork titles and the Pre-Raphaelites in general. 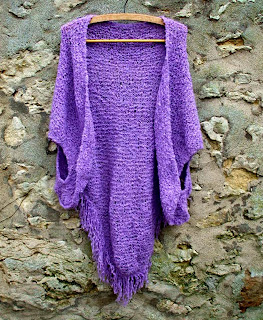 (inspired by The Long Engagement)

Funkysmart has a beautiful shawl inspired by Waterhouse's Miranda and the Tempest. 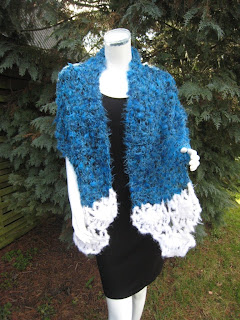 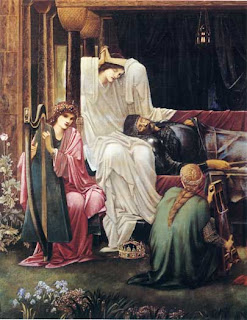 I recently enjoyed reading the book Julia Margaret Cameron's Women, which was full of gorgeous photographs by the wonderful Pre-Raphaelite style photographer.

"A good model was transparent, neither too expressive nor too individualized. Burne-Jones warned against an overly explicit characterization of mythic subjects. Countering criticism of the restraint with which he had imbued the grieving queens in The Sleep of Arthur in Avalon, he wryly commented: 'A little more expression and they would be neither queens nor mysteries nor symbols, but just...Augusta, Esmerelda, and Dolores, considerably overcome by a recent domestic bereavement.'"
Posted by Grace at 7:09 PM 4 comments: 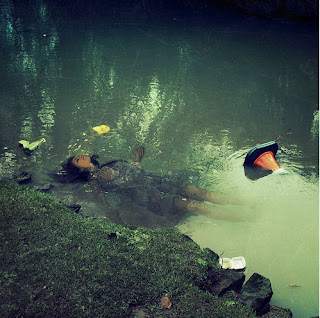 I've been doing a lot of blog-hopping lately...finding wonderful links on one blog and traveling to the next and next. This wonderful photographer/digital artist on Flickr is one I came across that way, and I've delighted in looking through all of her images on Flickr. Gorgeous work.

Anyway, this is her rendition of Millais' Ophelia, a commentary on water pollution.
Posted by Grace at 8:30 PM 1 comment: