Sometimes Morris the Wombat likes to celebrate #wombatfriday with a good book and a piece of chocolate cake.  But sometimes when the weather is as glorious as today, Morris likes to go out and bask among the glorious flowers in the garden. 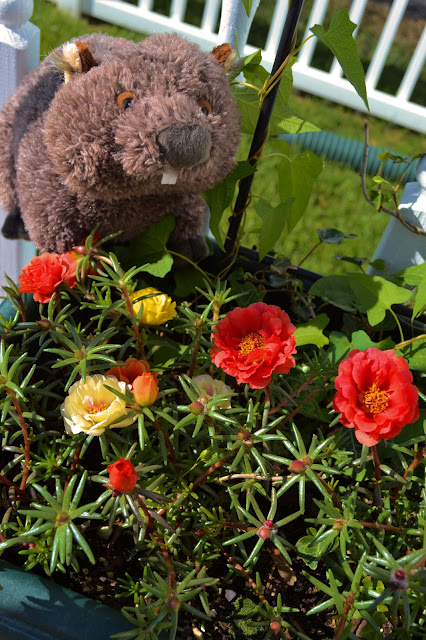 This past weekend I went on a journey...a pilgrimage of sorts.  This Pre-Raphaelite-obsessed lady went to the National Gallery to view the once in a lifetime Pre-Raphaelite exhibition there.

Despite a passion for the Brotherhood that made me start this blog over five years ago, I have actually never seen a Pre-Raphaelite painting in person.  Well...not until this weekend.

The experience was far too much to contain in one blog, so I'm going to do a series of at least two or three.  First, I wanted to share pictures from my trip to the Delaware Art Museum.  The National Gallery exhibition was extremely strict about not allowing pictures.  Delaware, however, has the largest collection of Pre-Raphaelite art in the United States.  And they were exceedingly kind and encouraging of photography, enthusiasm, etc.  While there, I met a security guard who also shares a passion for the Pre-Raphaelites.  (and gave him my card...hello if you're reading!)  Believe me, it was tempting to talk his ear off about these artists who so obsess and fascinate me.

So when I go to a convention or event and get to meet a celebrity, I like to get my picture taken with them as proof that I met them and for a memory.  It's understandable that I'd feel the same way about meeting these special pieces of art!  My friend Laurie indulged me and took my picture next to a few.  So I present to you...the Delaware Art Museum highlights!

The first image I saw at Delaware was this small portrait of Effie done by Millais on the trip when he first started falling for her. 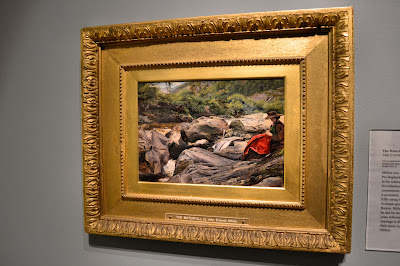 This was on the wall by the entrance.  Yes.  I quite relate. 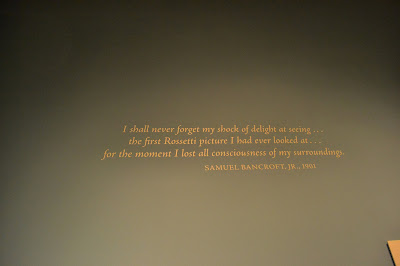 A Highland Lassie by Millais.  I always thought this was Effie? 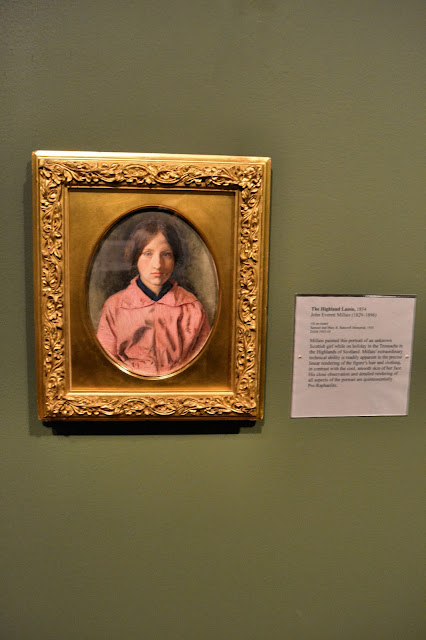 The Red Lion chair.  Its companion chair was at the NGA exhibition. 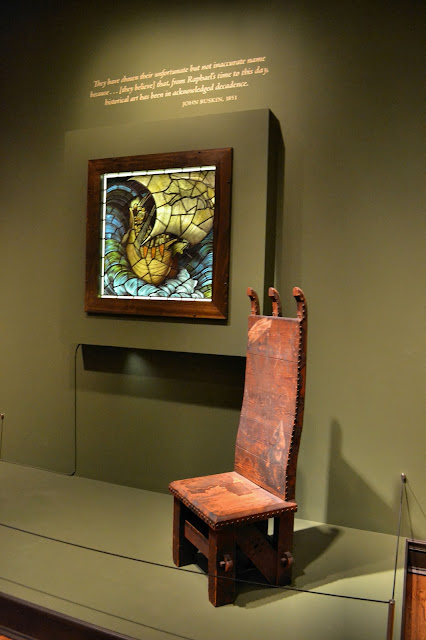 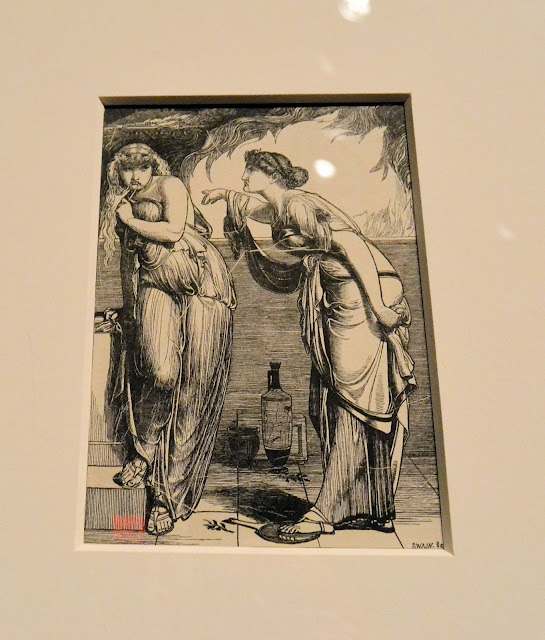 Three Women in a Garden Making Music by Kate Greenaway. 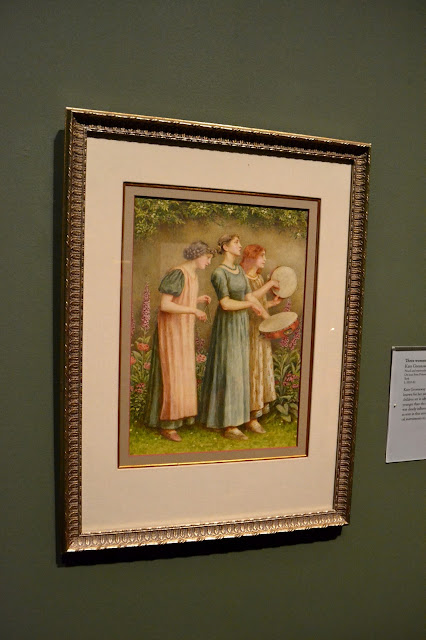 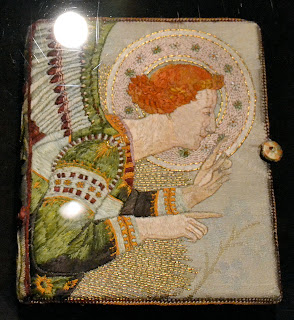 The Somnambulist by Millais. 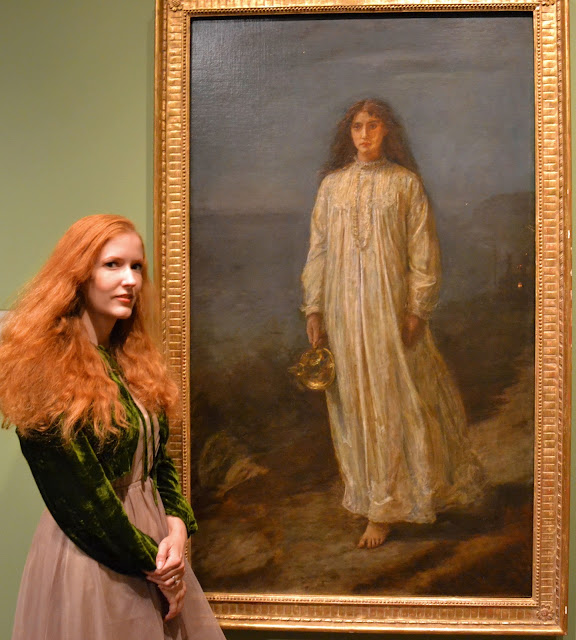 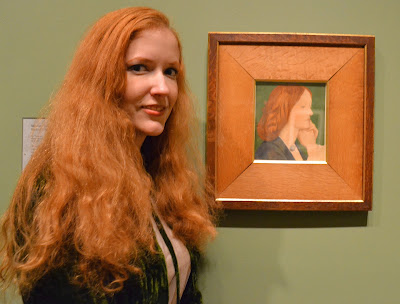 Squee!  Beata Beatrix!  When I saw the painting done by Rossetti at the NGA exhibition, I was quite overcome.  No seriously...to the point of needing to sit down and choke back sobs.  This version at Delaware was done by the studio assistant Charles Fairfax Murray.  And although it's technically amazing, I have to say...it doesn't have the soul of the original.  But still...I was thrilled to be able to see it in person. 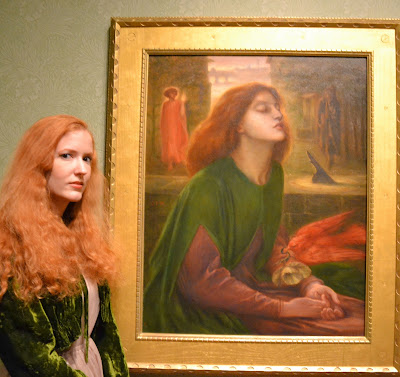 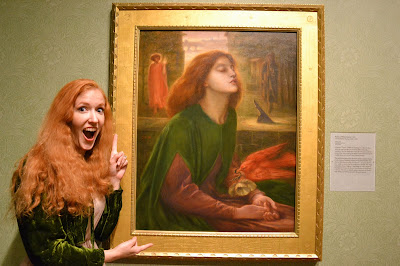 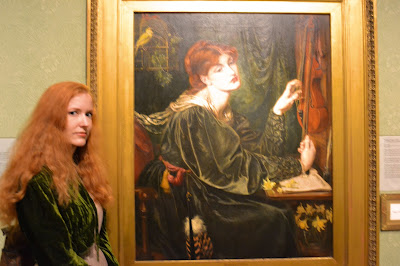 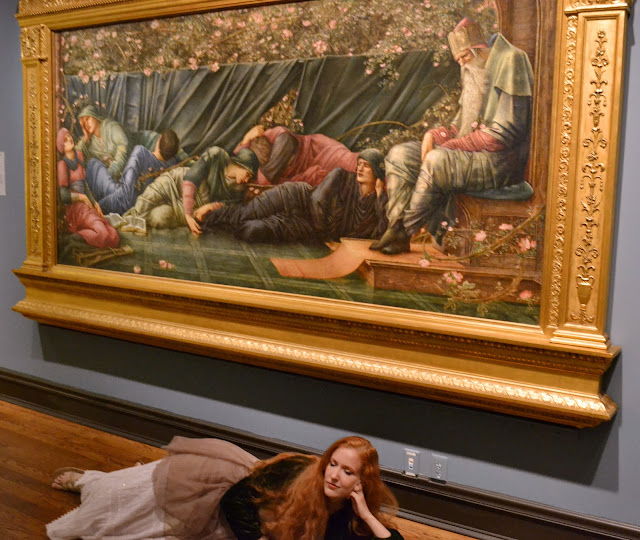 Hymenaeus by Burne-Jones.  Such lovely colors in person. 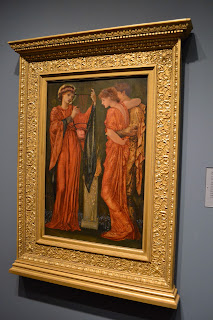 The Spring Witch by George Wilson.  The look on her face is just wonderfully rendered in person. 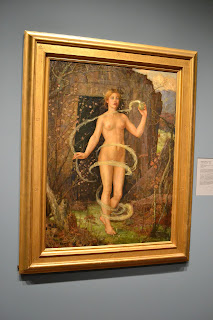 Cupid's Hunting Fields by Burne-Jones.  This image is basically embossed it's so three-dimensional, and the metallic is just magnificent in person! 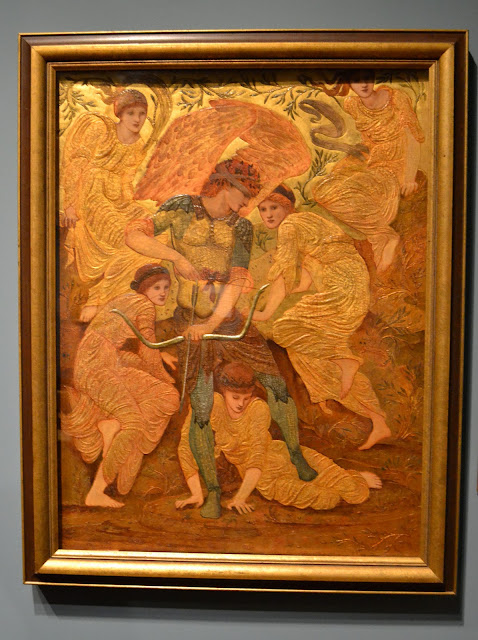 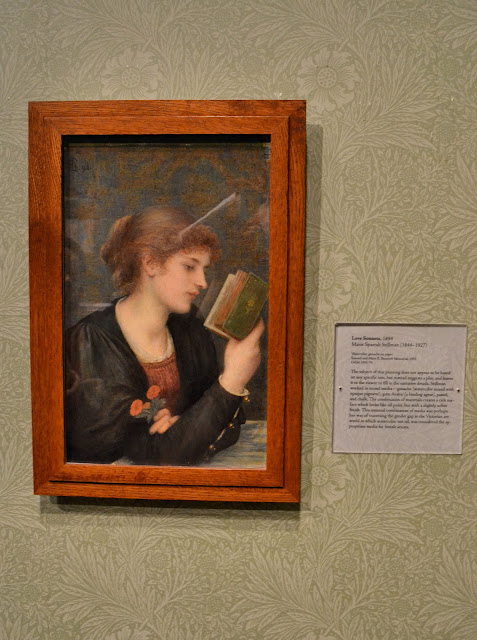 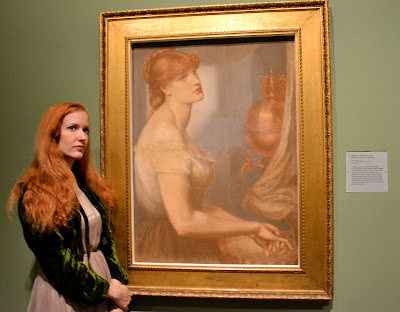 Getting goofy again, here I am mirroring Alexa's pose in the finished artwork, La Bella Mano. 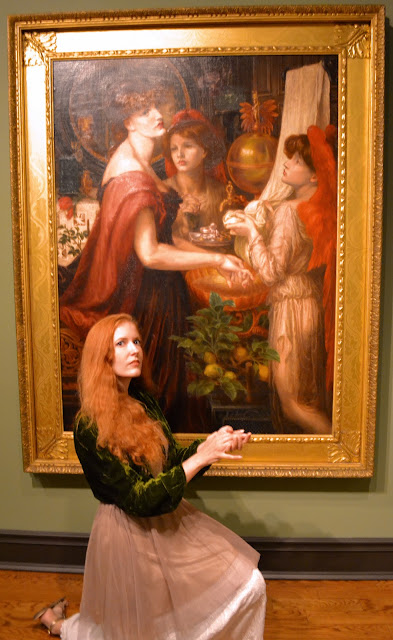 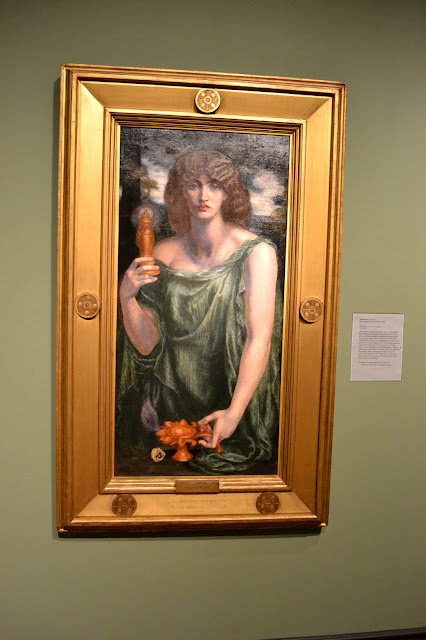 Once again I had to try mirroring the hand pose.  Water Willow...the portrait of Janey done on the shores of Kelmscott. 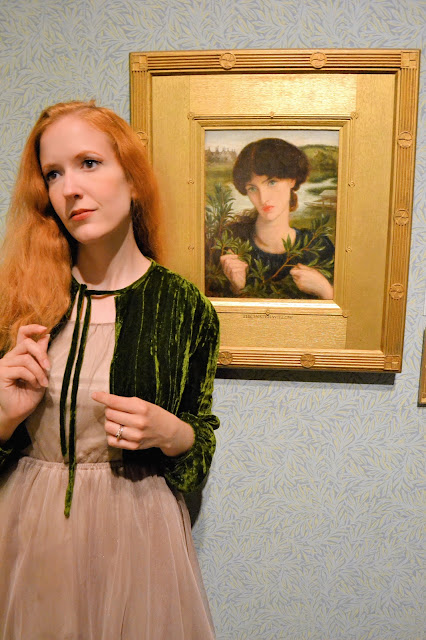 Delaware also has an admirable collection of Howard Pyle art, including his most famous piece, The Mermaid. 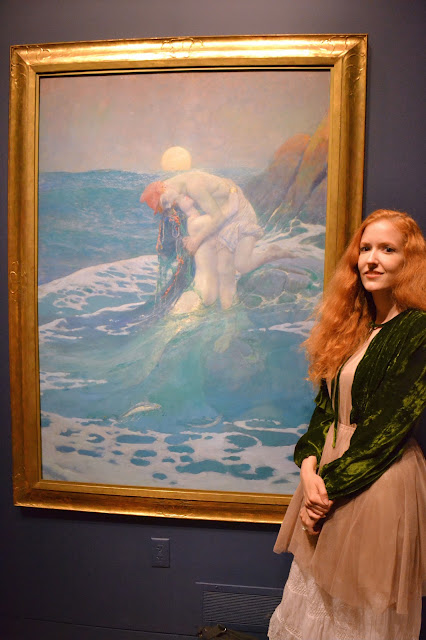 So there you have it!  A brief look at my pilgrima....I mean trip...to Delaware Art Museum.  Here's a teaser for my next post...since photography wasn't allowed in the exhibition at the National Gallery, I had to get creative...and mildly blasphemous. 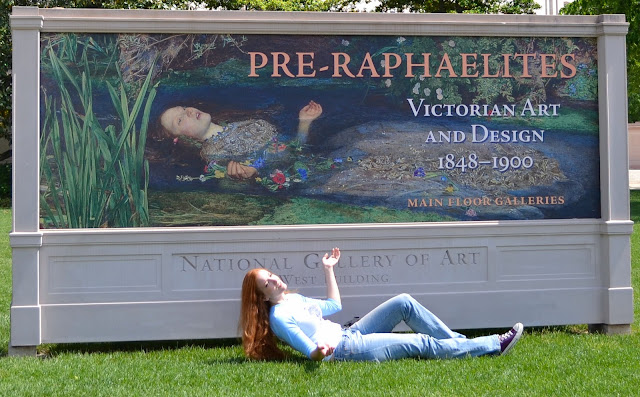 So Morris the Wombat decided (after reading Kirsty's blog post on Saint George and the Dragon) that Dragon Slaying is a perfect way to pick up chicks. 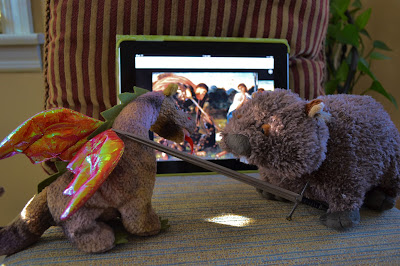 Thankfully he just didn't have the heart to follow through. 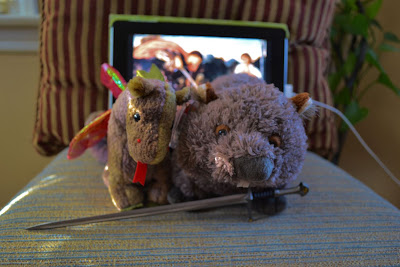