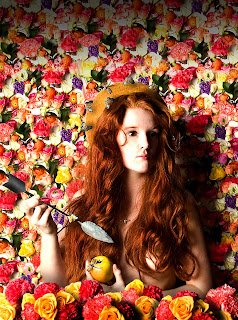 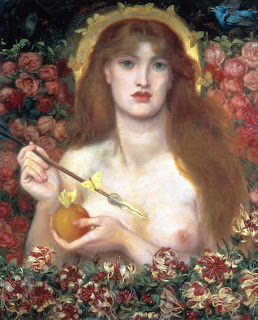 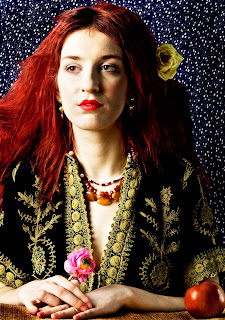 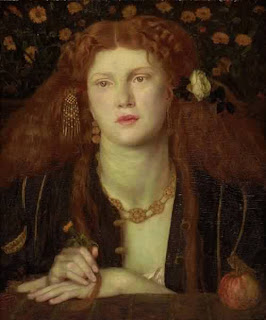 Thanks to photographer Poppy French for directing me to her recent project. The images are an homage to Rossetti, and they turned out beautifully!

Be sure to visit her website for more amazing images, all very surreal and lovely. This is what Vogue spreads should look like!
Posted by Grace at 6:22 PM 4 comments:

A little while ago, I did a post about Roger Scruton's amazing documentary about the philosophy of beauty. Well, one of the comments by Robert H was just so thought-provoking, I felt it deserved its own attention in a post of its own.

A link to the original discussion in case you've forgotten. My favorite portion of Robert H's commentary is in bold. :)

Don't worry over much about Scruton's apparent conflation of the Pre-Raphaelites with kitsch. Note he also includes Millet. Two possibilities arise, as both the PRB and Millet were roughly contemporary.

1) He is using them as a chronological marker without considering the works themselves to be kitsch. I'm being charitable with Scruton in including this because I don't believe it was his intent.

2) He does indeed believe the PRB and Millet were kitschy, at which time he lays himself open for serious scrutiny and eventual harsh judgment. Focusing on Millet, Millet oeuvre is best noted for for images of peasants working themselves to exhaustion to provide the meager amount of food that allows themselves to stay barely alive (while undoubtedly making some member of the bourgeoisie wealthy). He is painting the sordid truth of the French peasantry in the midst of their bone-breaking labors. It is not beautiful, nor is it meant to be. It is not kitsch; in fact, it is the antithesis of kitsch. These peasants are not some wide-eyed waifs sitting on rooftops painted by the Keanes, nor are they the garden gnomes that haunt our present consciousness; those images ARE kitsch, and the world be done with them.

Scruton has some personal, smug, elitist agenda that seems either ill thought out or is cynically contemptuous of his audience. In the BBC program, which I manfully sat through, I sense a man totally enamored with his oh so highly refined sensibilities. Recall the number of times it is he who appears to be the center of the program. Be that as it may, on the far side of the man's obvious narcissism in places he blatantly errs in his focus, which ties back to the Millet. In the midst of discussing beauty v. contemporary art he shows an image of Goya's, if I recall one of the Horrors of War, and then shows a modern adaptation of the same image, of which he obviously is simultaneously contemptuous and disgusted. I'll allow him that: I don't much care for a majority of contemporary art. HOWEVER... Goya's image is not beautiful. To claim it so is to cozy up to the perpetrators of atrocity, to condone the massacre of innocents. The image is everything Scruton condemns in the contemporary thrust of art to portray the ugly. And yet he appears to use it as an icon of beauty. Millet and Goya are focusing on the same desperate, horrid aspects of life, looking at it in such a way as the viewer will have a visceral response. They are painting or etching unvarnished truth.

If Scruton wants to live in a fairy land where bad things do not happen he has the right, twit-like though that may be. Goya and Millet were aware that the upper 10% of the population lived comfortably through the exploitation of the rest (and no, I'm not a Marxist). Peasants worked 14 hour days 6 days a week, and then were required to go to church on Sunday. Half the children born in the middle of the 19th century were dead before the age of 18. Pastel putti floating above beautiful gardens while maidens lolled about was not the world of the vast majority, who had no access to the world of beauty Scruton clamors for.

Briefly, because I already am overlong, much of what Scruton appreciates led directly to that which he reviles, not as a rejection of his avowed principle but as a direct and logical consequence of their central thesis: art for art's sake. He repeatedly quotes Wilde. Wilde was in the vanguard of bringing about the collapse of what he, Wilde, most loved. The irony and short-sightedness, to say nothing of the total ignorance of the evolution of the contemporary ethos, is astounding.

As for the PRB... I could write reams about the sheer folly of considering them kitsch. I am baffled as to why Scruton appears to hold them as exemplars of such abased sentiment, though I sense in the end insidious proclivities might arise were one to delve into the matter. Be that as it may, it was the PRB, leading to William Morris, the Arts and Crafts movement, and eventually Art Nouveau, which provided this tired world with its last taste of the endeavors of men and women who were devoted to the concept of beauty while considering the state of their fellow man. In the end, Scruton attempts to chop down the tree on which he is perched. Accept the value that he presents, but be skeptical of the man.
Posted by Grace at 10:46 PM 3 comments:

Sorry for the quality of the image, as it's a photo of a blown-up scan of a page of a book. :) Please do click to see what details there are.

I was perusing the thick tome of a coffee table book, In Vogue: The Illustrated History of the World's Most Famous Fashion Magazine, recently, when I was stopped in my tracks by the image of a Burne-Jones. The caption of this set of images said:

"In doing research for the photo shoot, one ofthe art books consulted by set designer Mary Howard and photographer Steven Klein was Christopher Wood's The Pre-Raphaelites (right), in which they found inspiration for the models' poses and hand movements realized in the finished take (left). Sixteen outfits, eight of them designed for Vogue, were selected for the shoot."

I was eager to find out the issue in which this feature ran, so I went on to read the text of the chapter. (some text cut for succinctness)

"Anyone leafing through the eighteen pages of the Chekhovian-Victorian romantic story titled "A Grand Affair" in the September 2005 issue of Vogue, photographed by Steven Klein with Grace Coddington as the fashion editor, could hardly imagine the degree of research and hard work behind the scenes, the level of creativity, the on-the-spot trouble-shooting, and the highly complicated logistics that took place before it reached the reader.

The objective was to take double-spread photographs in three days to fill a total of sixteen pages, at the rate of two setups a day. Smith and Coddington had chosen some sixteen outfits, eight of them designed in part for Vogue: a pink one by Dior, a red one by Alexander McQueen, others in gray by Carolina Herrera and Peter Som, white dresses by Tuleh, prints by Prada, and a white fur by Vera Wang.

Howard's team, which consisted of ten people, had created a charming winter forest with a lake.

A book brought by Howard, Christopher Wood's The Pre-Raphaelites, circulated on the set and was repeatedly consulted. Howard, trained in art history, is renowned among photographers for her high-quality research. "It was a great source of inspiration to see the poses, the body and hand movements of the women in the paintings, so that our models could imitate or reinvent them," says Klein.

Each finished take was printed and hung from a corkboard, so that the entire technical and creative teams could appreciate the results of the day's session and follow the direction of the story. Back at Vogue, however, Anna Wintour found the photographs too static, too formal, and lacking the energy she looks for in a portfolio. Result: Everything was to be done over, using only a part of the approved wardrobe, and only one model, the Russian Natalia Vodianova. This time it was to be done outdoors, with a smaller production team..."

The finished spread featured the below pictures among others: 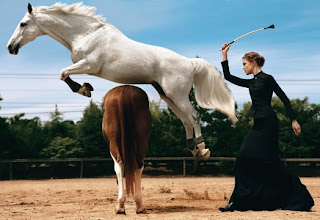 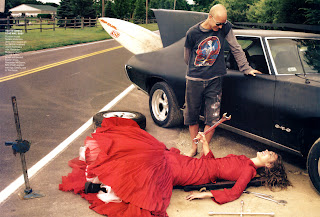 So apparently the original Pre-Raphaelite inspired shoot, filled with two-page spreads of five models sumptuously larking about in a forest, will never be seen, other than the small grainy teaser photo I found on page 361 and blew up as large as I could.

I don't know about you, but I would have MUCH rather seen more of the "static" Pre-Raphaelite images. These ones are fine, but they aren't the sort of thing that stops me in my tracks like I'm betting the forest images would have.

Having watched The September Issue, I know this isn't the first time Anna Wintour has rejected a photo from a Grace Coddington shoot that I thought was incredibly beautiful. As part of that documentary (which I recommend to anyone who enjoys fashion or photography), Grace Coddington does a fashion spread with a 1920s Jazz-Age theme, which includes a beautiful two page spread image with multiple models. Anna rejects that image as well, Grace is furious, but acquiesces. Here also, the only teaser we'll apparently ever see of this image is a grainy blur on the DVD: 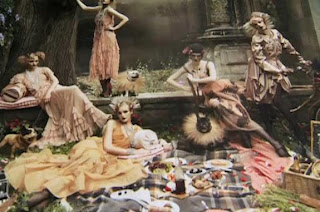 Beautiful, isn't it? Alas for all the beauty in the world that we will never see.
Posted by Grace at 8:56 AM 9 comments: