Today's topic is the Pre-Raphaelite artists and their "signature look" or "model type". For instance....Burne-Jones loves a willowy, haunted model, and his consistency between models and artworks lies primarily in the eyes...they are almost always dark, shadowed, haunted.

Whereas Rossetti was all about the lips, as well as the thick neck, and sometimes rather large but expressive hands.

But like I'm discovering happens so often, I was distracted also by another prevalent theme....as I searched through the "greats" of the Pre-Raphaelite style looking for body type, the best way to tell was by looking at their nudes. And one thing jumped out to me....

These women have real bodies.

They have hips! Their stomach sticks out when they sit down with bad posture! Their 6-pack abs grow soft around their stomachs! In this modern age of lipo, extreme dieting, and airbrushing pictures beyond mortal proportions, it is incredibly refreshing, and ego-boosting, to see that the Pre-Raphaelites looked at women with real bodies and real curves (or the equally beautiful thin model with not many curves but soft and thick hips, etc) as beautiful and graceful. Want to look like a Pre-Raphaelite model?? Embrace your body!*** 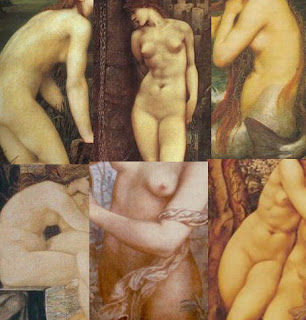 ***The above message applies to me as much as anyone else. Why do we beat ourselves up so much??
Posted by Grace at 5:42 PM

I think that's why I first fell in love with Pre-Raphaelite art--the women look like real women with curves and a true feminine physique.

I am sooo Pre-Raphaelite!

This is the most wonderful post! It's so important for women to see themselves as beautiful, held up as iconic, when all around us, we're being held to unrealistic standards of beauty.

Along these lines, the new Glamour magazine I just got the other day (yes, I subscribe) had a feature on body confidence that compared a modern model's body to Venus (Birth of Venus). It was wonderful! I may clip it out and stick it somewhere.

Hi, I love your post, and the pictures you added to it. I'm a life model myself and most artists prefer to work with more curvy women which is good for me :-). Overall they don't like stick-thin women.
At least a group of creatives who haven't been fooled into thinking the thinner the better.

Hi Nienke! Thanks for your comments! It is indeed wonderful that artists can appreciate all different forms of womanhood. :)