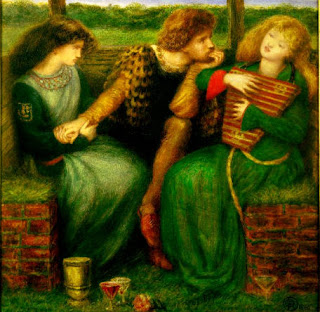 I just finished reading a, honestly, rather forgettable book called The Pre-Raphaelites: Their Lives in Letters and Diaries. There wasn't much new information to be found in this book, but there was a small color illustration in a section on Rossetti of an artwork I had never noticed before, called The Merciless Lady. The caption noted that the picture showed "a man between two women, one dark, one fair, in triangular tension of the kind that characterized many of his own emotional relationships."

Well, looking at it, I'd call that an understatement! I think this picture shows, incredibly clearly, the love Rossetti had for two specific women...Lizzie and Jane. The figure on the left is most definitely reminiscent of Jane Morris, with her dark hair and distinctive profile. The figure on the right, with her pale hair and eyes downcast, is a dead-ringer for Lizzie. The central figure, which is Rossetti in my mind, has his hands clasped in Jane's, but his attention is captured by Lizzie. What a perfectly iconic image of the tumult Jane must have felt being in a relationship with a man who was still, in many ways, fixated on his dead beloved. I've never seen an artwork that so fully captured the sum of emotions involved with Rossetti's feelings toward these two very different beauties.

What do you think of this image? What does it say to you?
Posted by Grace at 6:00 PM

I totally agree! But it was painted in 1865, after Lizzie's death. I actually think that the blonde is Fanny Cornforth, Rossetti's housekeeper and mistress, whom Jane was always rather jealous of, since Rossetti was with her all the time...What do you think?
~Margaret

The title is what gets me, because it makes you wonder. Did he perhaps see Jane as merciless?

I love this painting because of their body language...he so entranced by the young lovely (I think it is Fanny, too) and the figure that is obviously Jane sits so stiffly, a protective (or predatory?) clasp on his arm.

Rossetti was very good at keeping his life compartmentalized, so Fanny and Jane may not have had that much contact with each other in actuality. But I do wonder if this painting is based in truth.

Have you read Kirsty Stonell Walker's biography of Fanny? I enjoyed it very much.

You both really think it's Fanny? Even with those heavy-lidded downcast eyes? I'd be surprised to find that out, but then he did indeed use Fanny as a model an awful lot. The face just seems so delicate, as well as the build, for it to be Fanny. Stephanie, this figure actually really reminds me a lot of the one in _Bottles_ that has been described as Fanny and also as Siddal. How interesting! :)

Although playing devil's advocate to my opinion, he DID seem to use Fanny as the temptress in a lot of his pieces, and this fair maiden is definitely in more of a temptress role.

I think of the titular Merciless Lady as being Siddal, in his eyes, who continued to haunt and captivate him even after her death. (of course I don't view her in such a negative light, but I suspect he might have some bitterness involved with his posthumous obsession with her!)

Oh, and PS: I haven't read the biography yet, just a dozen pages that were available on the Google book preview pages, but I do very much want to track it down!

I think it is interesting that both ladies are clothed in green as if to give them equal billing, at least on a visual level. His body language also adds to the balance - leaning towards one, being pulled by the other - a kind of give and take. He could easily have put one in another color to further differeniate but chose not too, and I wonder if this is symbolic?

Oooh nice catch, Lisa! I think you're right, that visually the green ties the two of them together and creates more of a feeling of equality.

Also, look at the glasses at their feet. Only the merciless lady's is still full, untouched.

True! And so many ways to interpret that. It could be symbolic of "the cup of life" that is drained empty for the two, but still full to the brim for Jane. It could represent the feeling of inebriation he feels towards the harpist, and the fact that Jane is still "seeing clearly." Or it could just plain mean that the two figures are more inclined to "eat, drink, and be merry" while Jane takes a more temperate view.

Whereas the two women appear to be looking at each other, and the blonde has, well, claws.

And they all appear to be sitting on grass growing on top of bricks. (? -> !)

max
['That's definately an odd one.']

Max, I think they're sitting on a what is known in landscape garden terms as a "ha-ha", a break in a lawn, often made with brick or stone, which was there to keep the livestock that sometimes wandered the outer parts of an estate's park.

This site has a series of pictures that illustrates the restoration of a ha-ha wall in Swindon:

Do others here concur?

I should have said that it was meant to keep the livestock from wandering closer to the house and getting into any more formal gardens there.

Looks like a "ha-ha" to me. What a crazy name! I learn something every day :)