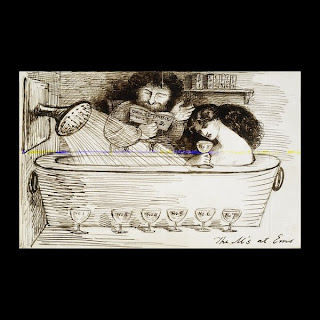 The Pre-Raphaelite Brotherhood and their followers were known for their exquisite paintings depicting very narrative scenes. But in private, this group of friends liked to exercise a different form of art...that of comedic caricature. The above piece, Rossetti's The M's at Ems, is probably my favorite. Drawn for Jane Morris to help lift her spirits when her health declined, it depicts the M's....Jane and William Morris...at the Spa at Bad Ems. Jane sits in a tub sipping a goblet of spa water...one of seven she has to drink as part of her therapy, while Morris reads from his Earthly Paradise volume #1. Rossetti accompanied the sketch with the words (paraphrased, since it isn't right in front of me) "To help you get through the seven goblets or the seven volumes, whichever comes first." 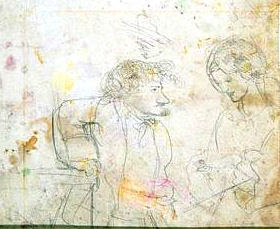 Rossetti's caricatures of William, however, always struck me as slightly mean-spirited. Which clearly shows that I'm allowing my knowledge of his betrayal of their friendship with Jane Morris to color my opinion, because Edward Burne-Jones also made similar rotund, jovial images of his friend Topsy but those don't bother me as much. The above drawing (best image I could find online of it) is of Morris proposing to the young Jane Burden. Jane is drawn as towering above the squat William...regal, with an unearthly beauty. Morris is an exaggerated mockery, with a pointy chin and disheveled hair. 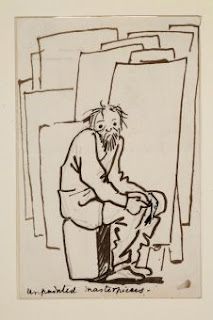 Comedic self-portraits were also popular. The above self-portrait of Edward Burne-Jones was one of many he did, showcasing his tall and thin frame. This sketch is entitled Unpainted Masterpieces. 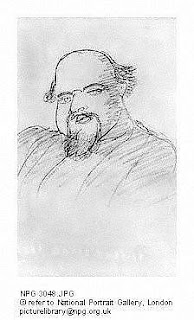 Rossetti also did a cartoon-style self-portrait.

Poor Topsy...the subject of so much teasing. He seemed to keep a good attitude about it, however. The above image, again, by Rossetti, shows Morris at the age of 24, discovering his rapidly expanding waistline. However, in another sketch by Burne-Jones of Rossetti carrying cushions for Jane Morris to recline on, (un-located online!) the tables are turned, and it is clear that Rossetti too had a portly frame in middle age.

Above is a drawing that can be folded different ways to get different combinations of ridiculous body types. The Pre-Raphaelites certainly had a wonderful sense of humor!!
Posted by Grace at 9:55 PM

I definitely agree with you about Rossetti's sketches of Morris! They certainly seem a bit mean spirited (though some of them are more light hearted--I remember one that Rosetti drew of Morris weaving that was pretty funny!).

The one of him teaching the lecture on weaving with his back to the audience? I like that one too. :) But I thought it was by Burne-Jones?

I'm only now getting around to commenting...but I have to say--once again, you've managed to provide me with marvelous anecdotes that I was unfamiliar with...and I *love* the caricatures! They made me smile... Bravo! :D

The one you can fold up to make different silly images made me laugh out loud when I found it online.