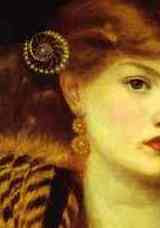 Do you ever look at an artwork that you've seen a million times, and all of a sudden, something you never even noticed before becomes immediately apparent? One thing I so admire about Pre-Raphaelite art is the way that little details emerge each time you stare at a painting.
Recently, I read the book Pre-Raphaelite to Arts and Crafts Jewelry, after Jen Parrish mentioned it in a blog of hers. The book made mention of Dante Gabriel Rossetti's favorite pearl pin, and showed a couple of artworks in which he featured the piece of jewelry. I can't believe I never before noticed in how many of his artworks this brooch is featured! According to the book, the pin was "borrowed" by a friend, who lost track of it. Rossetti was quite furious about this. I would love to find a replica of this pin somewhere. 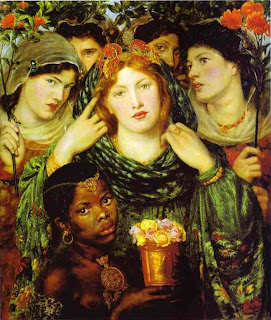 Here the pin is worn by the figure in Mona Vanna. 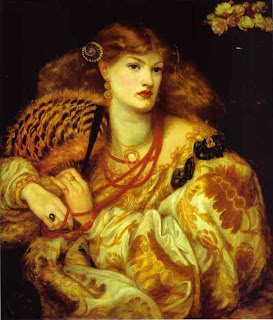 Jane Morris had her turn wearing it in Mariana. 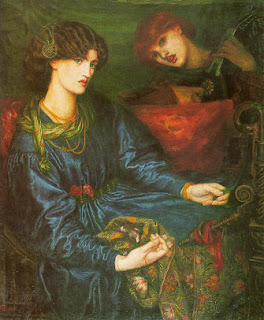 Even a different artist, Marie Spartali Stillman, had to include the pearl pin in a portrait she did in the style of Rossetti, Jolie Coeur. 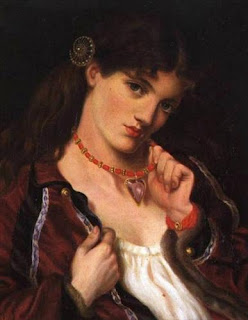 How fascinating! The pin is lovely but it makes me wonder how I managed to look at those paintings a thousand times without realizing Rossetti was using the same pin over and over again!
~Margaret

Wonder what ever became of it? Wouldn't it be miraculous if it shows up on Antiques Roadshow?

So you have the book Flora Symbolica: Flowers in Pre-Raphaelite Art? If not, I think you'd enjoy it too.

Margaret, I couldn't believe I had overlooked it too!!!

Lisa, I saw that book on Amazon the other day for the first time, and added it to my ever-growing list of Pre-Raphaelite titles to Inter-library request. Do you have it?

Interestingly enough, I'd noticed that pin, and been intrigued by it for a long time. In fact, when I did a recent photoshoot with a redhead I was originally hoping to do as Monna Vanna, I spent a considerable amount of time trying to figure out if there was a way I could reproduce it. (No, I couldn't figure it out--although I think it would be quite easy, if you're a beader!--and wound up doing Persephone, instead of MV, because white doesn't photograph well on people with fair skin. ;)

Sadly I've learned that about redheads in white...they look lovely in paintings (Lady of Shallot, The Accolade) but in photos, at least the ones taken with my cheapie camera, it's hard to get the contrast right.

We PRB fans need to create a catalog with replicas of dresses and accessories!

Hi! I came upon your blog, which I think is just great! :) I am a Masters Student at the Sothebys Institute of Art- London, and I am writing my final dissertation on "Pre-Raphaelite Jewellery: The Avante Garde Archaic.". I will be analysing all paitings with jewellery; the designs made by the brotherhood - some which survived and some which didnt. I will try to find missing links nd maybe even missing pieces. Few people know that the PRB were actually jewellery designers as well! :) Any info for future reference would be great. My email is: agster1@hotmail.com. Would love to share my findings one day with similar-minded Pre-Raph fans.