The Fairest of Them All: Fairy Tales and the Pre-Raphaelites 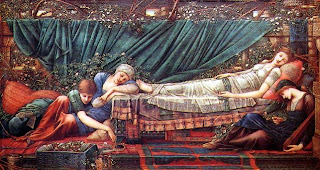 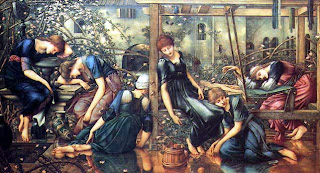 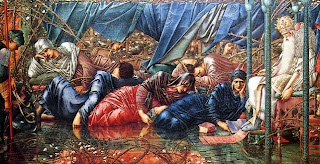 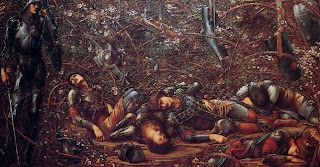 To those of you who don't know me personally and already know this to be true, my greatest love and fascination aside from the Pre-Raphaelites is the realm of fairy tales. I am fascinated by the original tales, their modern retellings, any art based on them, and all professional criticism and theory surrounding them. Therefore, I don't know why I didn't think of this subject for a blog post here sooner...a combination of my two greatest loves. But the question is an interesting one. Where did the Pre-Raphaelites and the classic fairy tales intertwine?
We know that, of course, Arthurian romances, Shakespearean tales, and the romantic poems and tales of Victorian poets like Tennyson were all frequent subject matter for the members of the original Brotherhood and the artists of the second generation (Rossetti, William Morris, Burne-Jones), but what about the classic fairy tale stories so popularized (and changed) in Victorian times? What of the Brothers Grimm, Mother Goose? Were these treasure troves of imagery ever explored by the Brotherhood?

Well, to begin with, one could take the easy road out, and argue that the famous illustrators of the Golden Age of Illustration (1880s-1920s) were greatly inspired by Pre-Raphaelite work, and sometimes these artists were the Pre-Raphaelites themselves (Rossetti, Burne-Jones, etc all contributed art to narrative story books in their careers). Even such famous fairy tale artists as Walter Crane, Howard Pyle, and even the revered Arthur Rackham have traces of Pre-Raphaelite romanticism in their work.

But among the original Brotherhood, the romance of the fairy tale seems strangely lacking. Arthur Hughes (not an original founding member, but very closely associated with them) did a painting entitled Beauty and the Beast, which strangely enough considering the title, features just Beauty (perhaps the viewer takes on the role of Beast, watching his beloved?), standing in front of a wardrobe of gowns, sadly contemplating a poesy of flowers. The magic mirror that figures into the tale is barely visible on the edge of the painting. This may be the closest thing we can find to a founding Brotherhood member doing a fairy tale work. 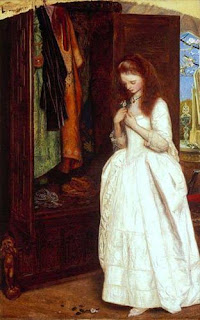 The most prolific connection between fairy tales and the Pre-Raphaelites' second generation would certainly come in the person of Edward Burne-Jones. Among his most famous images are his Briar Rose series of paintings (seen at top). He also painted Cinderella, and painted sets of tiles telling the stories of Beauty and the Beast, Briar Rose, and Cinderella. But Sleeping Beauty definitely seemed to be his favorite image. A few Burne-Jones scholars have theorized about his fascination with the innocence of youthful womanhood translating to his subject matter in the Sleeping Beauty paintings, where youth and innocence are frozen forever in time. 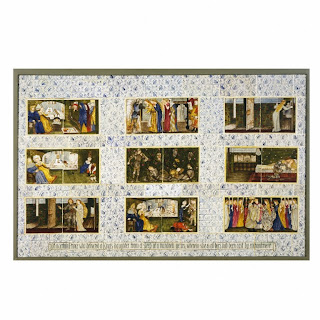 Beauty and the Beast tiles, by Burne-Jones: 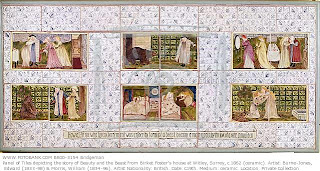 And then there is a more indirect link to the Pre-Raphaelites and fairy tales...the legends that revolve around the artists and their families. Recently, I was looking online for articles about Snow White, and in an excellent article by Terri Windling on the subject, she mentioned how fascinating it was that Snow White was perfectly preserved in her coffin, never decaying or dying. The same can be said of the 100 year sleep of Sleeping Beauty. I think you can probably see where I'm going with this metaphor. When Lizzie Siddal was exhumed seven years after her burial to retrieve Dante Gabriel Rossetti's poems, legend sprang up that she was still perfectly beautiful, her long red hair having grown to fill the casket. That certainly sounds like a fairy tale to me! 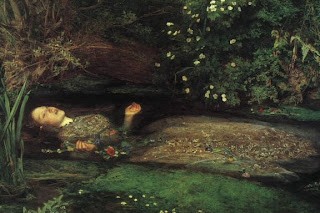 Among the artists of the late Victorian era who cite the Pre-Raphaelite Brotherhood among their inspiration, this list of fairy tale-inspired paintings grows far larger. Many thanks to Art Magick's wonderful search by theme feature on their website, without which tracking down all these artworks would have been a far more challenging proposition. 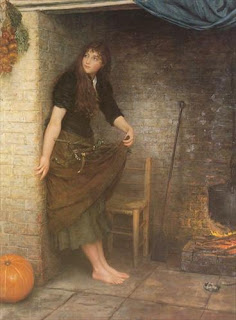 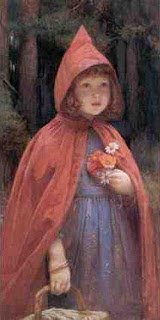 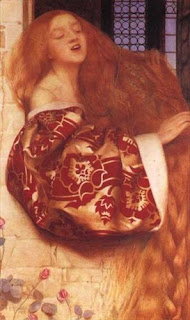 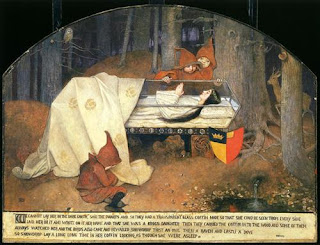 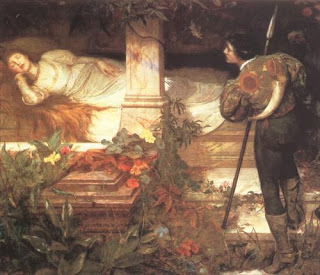 The Princess on Glass Mountain by Marian Stokes. This image especially fascinates me. The strongly patterned fabric is reminiscent of Cowper's work, but the woman's face seems straight out of Waterhouse's A Tale from the Decameron. (click the link to check out the similarities) The glass shards look so utterly modern, Picasso-esque almost, but the figure is utterly Pre-Raphaelite. Amazing. 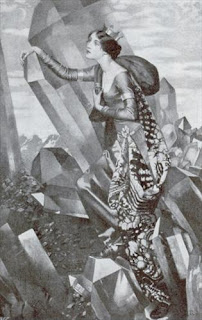 This utterly Pre-Raphaelite image is actually from a Nursery Rhyme! The Queen was in the Parlour, eating Bread and Honey by Valentine Cameron Prinsep: 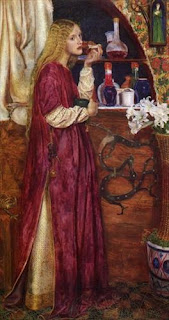 And finally, there are, as I have already mentioned, numerous artists of today whose work reflects the Pre-Raphaelites. Among those who have done fairy tale paintings with a Pre-Raphaelite look, there are Kinuko Craft, Angela Barrett, and Howard David Johnson: among many, many others.

I've utterly enjoyed this chance to combine both of my great interests into one blog post!
Posted by Grace at 10:24 PM

The Burne-Jones Cinderella has always been my favorite. I think it's because of the blue and white china in the background.

Loved this post - that Hughes Beauty is *gorgeous*! But that's probably because it appeals to my 18th century fixation!

What a great post, the Arthurian Tales are not far off fairy tales either.

Bless you for the new Beauty and the Beast images! I loved the Disney movie so much as a child that it led to a life-long obsession with the tale-- I have over thirty versions of the story in at least five languages, as well as similar tales like the Lady and the Lion. But I'd given up on finding any PRB art of fairy tales besides Sleeping Beauty. I will treasure these pictures!

Hey Grace!
Where ever do you get these wonderful images? How clever, to blog on the connections between two things that capture our hearts. I particularly love little Red Riding Hood; the lighting is so soft. Thank you for sharing your expertise in such an eloquent way. Take care, Anita

Just wonderful. Many thanks for
hitting my interests too

Oh really, this is a magical post Grace! You have the touch of magic. Have an inspiring day! Anita

Cinderella by Prinsep is gorgeous! The pumpkin in the corner, the dying fire in the hearth, and the twigs in her skirt are so beautifully depicted. Thank you, Grace, for publishing it! I must have a copy!

Hello! I have been reading/studying Pre Raphaelite art since I was 10. I have become a model of sorts and have recreated the Lady of Shalott as well as some other PR paintings. If you'd like to see the work, let me know!! :) PixieFat@hotmail.com

Hello! I'm linking to this wonderful blog post of yours as I've been writing about faeries after having been to a museum exhibit in Sunderland (northeast England) near where I live. I, too, love Pre-Raphaelite paintings and faeries, though I don't think I realised how much until recently. I'm sure I'll be back to your blog very soon! Best wishes, Shelley

Henry Holiday was a Pre Raphaelite who did fairy tale images. Most notable may be his Sleeping Beauty on the Red Bed for William Burges.