A couple of weeks ago I promised you more pictures from the Cincinnati Art Museum. These artworks aren't necessarily Pre-Raphaelite, but they are ones I felt bowed to its aesthetic.

A gorgeous, immense painting of Ophelia from Hamlet. I didn't get the name of this one, apologies. 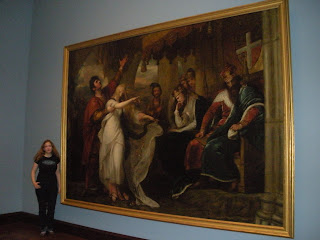 My first Bouguereau! Meditation. I was struck by how very real the central figure's face was. Quite believable as a person who truly lived. 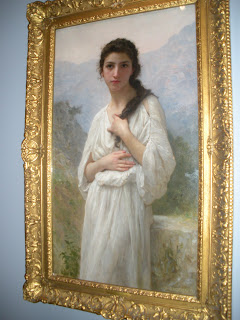 My first Alma-Tadema! Comparisons. I was awed by how small this painting was, and how delicate the detail work. 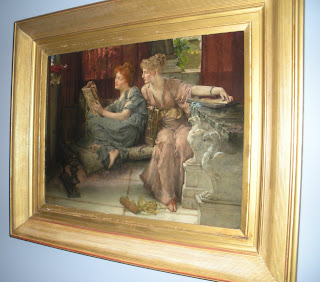 Eve Hearing the Voice by Moses Ezekiel. I was absolutely dumbstruck with the power of this statue's pose. No matter what direction you approached it, the figure's expression was palpable. 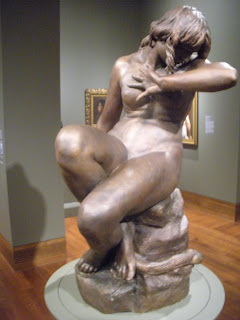 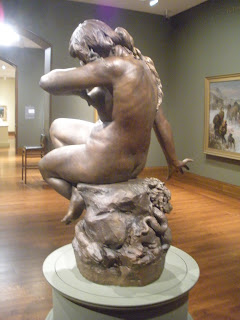 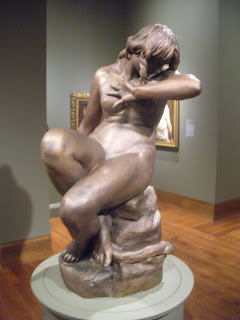 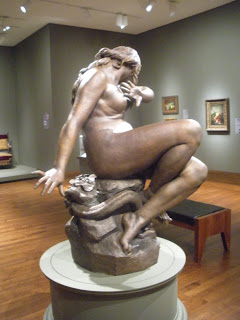 and I also appreciated that the figure was rendered realistically...including cellulite!

Also note the serpent twining around the base. 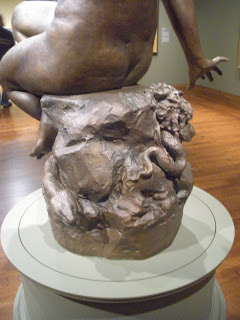 The Harp of Erin by Thomas Buchanan Read. An allegorical painting in which the woman, with shamrocks in her hair, represents Ireland, chained to a large rock that represents England. I was quite smitten with this painting. 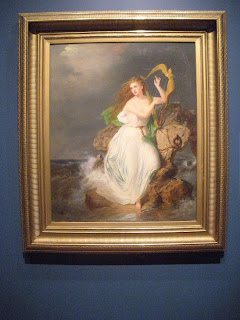 A corner cupboard with carvings of Freya and Thor, by Henry Fry. Click the image to see the carvings better! 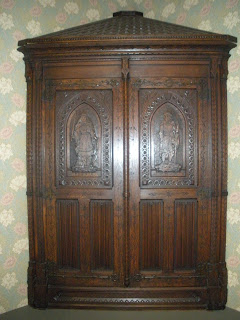 I am smitten by this bedstead by Benn Pittman, Adelaide Nourse Pittman, and Elizabeth Nourse (and how neat that it's two women and a man who created it, and all family). It's described on its plate as "probably the finest example of American Aesthetic Movement furniture." I must agree. The two painted panels represent day and night, and the birds in the center are very three-dimensional. 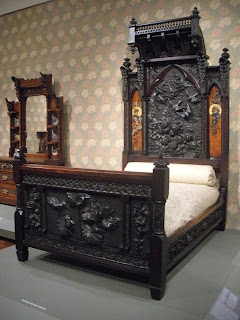 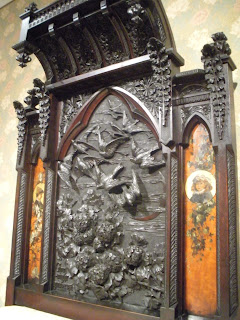 This is a gorgeous study for Moods to Music by Robert Frederick Blum. I love the romance and the sense of movement to this artwork. 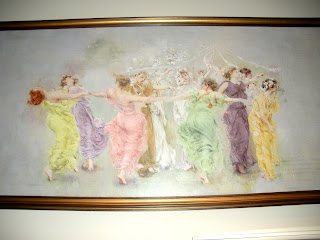 A hanging cabinet designed also by Benn Pittman, carved by Emma Marqua, and painted by Charles T Webber. The plate beside this explained that it was very much inspired by the British Aesthetic Movement in furniture. The painted images are a memorial to the recipient's sister, showing the subjects of a poem she once wrote. 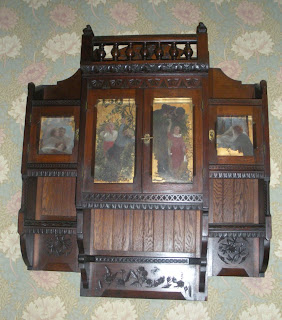 This is too fun; you took us to the museum! Don't you just love the French artists? You have a nice museum out there in Cincinnati! Our Minneapolis Museum of Fine Arts is quite impressive as well. Take care Grace! Anita

Completely OT, but I just got home from Israel (today!) and while I was in Jerusalem I got a chance to walk by William Holman Hunt's old house! It's private property these days, unfortunately, so you can't go in, but we got a shot of the plaque out front. I thought you'd like to know.

Lylassandra, I'd love to see that picture! What a wonderful experience that must have been.

And thank you Anita! Sadly I live nearer to Columbus than Cincinnati, and our museum, though good, isn't as geared toward the Victorian artists. So it was great to visit Tess and admire her museum!!

Can I just say that while I loved this post and the photos, I am completely and unabashedly green with envy? (And not just any green, mind you. A deep Rossetti-type green, a la Proserpine)

Seriously, it looks like a beautiful exhibit. I'm glad to see you had such a great time! Thanks for sharing! I would love to see that huge Ophelia in person. It looks immense!

What a great museum and wonderful pictures. Really enjoyed this tour.

Awesome. Do you happen to know how long the exhibit will last? My fiancee and I will be moving to DC in a few months, and this might give us reason to stop in Cincinnati along the way.

Thanks Stephanie and Hermes! And Kraorh, to the best of my knowledge, everything I featured is actually not an exhibit, but part of the permanent collection. The museum is free to visit (there is a minimal charge to park) and the location is a beautiful park. I highly recommend it!

Grace,
I should be downloading all my pictures tonight; I'll try to figure out how to share it!

What fantastic photos! Thank you for sharing, Grace. I really do love the sculpture as well.

Hi Grace!!!
Yes, we are called Rabbit Hill. We were going to put a little sign in the garden, but instead we have two metal garden rabbits in the entrance. However, I think I am going to have my husband make a sign and post it up on the gate. He made the gate, the shutters and the over hang you know! He is a charm and what a prince! On Flickr, there are oodles of pictures of the cottages. I will get some ideas!! Thanks for asking and visiting. It is always a pleasure to hear from you! Anita

Thanks Margaret! The statue is a bit larger than lifesize, and it caught my eye from two galleries over. It's gorgeous!!

Hi Grace! Yes, we have a lot of bunnies in our garden and we find them very sweet. They don't eat our flowers or bother anyone so we enjoy them! They really do add to the charm. As we speak at this moment, my husband is finishing up our bathroom and I am doing some homework, but I hope to blog with more Carmel and local cottages either tonight or tomorrow, so stay posted for some more on cottage charm!!! Take care, Anita

Hi Grace, I found your blog through your comments at Castles Crowns and Cottages. It's so lovely here - I will stop back often.

That bed is amazing!