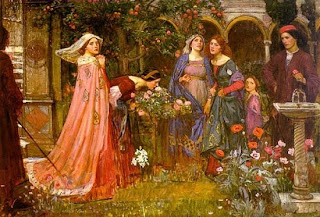 You may already know that of all of the second and third generation P.R.B.-inspired artists, John William Waterhouse is my favorite (in fact, my favorite artist of all time). Although I cannot say that his Enchanted Garden is my #1 favorite of his works, it is one that haunts me with its beauty as well as its intentional and perhaps unintentional symbolism.

The artwork shows a story from Boccaccio's Decameron. The story told is explained in the transcript of a lecture by Sandra Penketh:

It [Waterhouse's painting] tells the story of a young man Ansaldo who falls in love with a married woman Dionora. It's Dionora that you can see on the left-hand side of the painting. Dionora is married to Gilberto but Ansaldo doesn't let this put him off. Not at all. He pursues her and pursues her and despite her doing all she can to deter him he continues to pursue her. In the end to try and get rid of him she gives him what she believes is an impossible task to do.

She says I'll only return your love, become your lover, if you can do this task for me. The task that she sets him is in January in the midst of winter to produce a summer garden...

So Dionora doesn't make public to her husband what she's done, this task she's set or the whole situation. She just gives Ansaldo this task and thinks that's the end of it. But Ansaldo being rather clever finds a magician who can do the task for him...The magician successfully produces a summer garden in January.

However, the thing that always struck me the most about this artwork was the fact that Waterhouse left it unfinished when he died. It was one of the final projects that he was working on, and when I look at the artwork, I think it shows. The woman on the left, in the pink gown, looks behind her at the snow blowing in on the steps to the garden. Her expression shows trepidation and concern...she is more worried about the cold outside the enchanted space than the beauty within. It is as if she knows that the created summer won't last forever...winter has only been delayed. Waterhouse seems to have the thought of his own mortality in mind in this photo. The unfinished quality of portions of the canvas only add to their emotional impact to me.

Waterhouse also included many of his signature elements in this artwork. There is the woman bending over to smell a rose. There is the woman in blue lifting her skirts to reveal the red beneath (Waterhouse adored a blue and red gown scheme, and used it time and again). I have a suspicion that there's even more symbolism in this painting than I have yet discovered. It is as though he wants this one painting to include everything he has ever striven for.

Again, although this may not be my absolute favorite artwork by Waterhouse, it is by far one of the most moving.

For a full transcript of the lecture given by Sandra Penketh on this artwork and Waterhouse's The Decameron, click here.
Posted by Grace at 2:39 PM

I thought the story about this painting was so interesting! Thanks for sharing! I'm still reading, just on googlereader via rss feed! :-)

Yay! Glad you're sticking around ;)

Not sure if you'll get this or not. I know this is a late comment to an old post, but I really like this blog! I came across it when I was looking for an image of The Enchanted Garden (which I nicked and put in my blog if that's ok?). Luckily for me, I live in Birkenhead (UK) where The Lady Lever gallery is and I went to visit recently (not for the first time, I might add). My favourite artist is Waterhouse and I wrote a bit in my blog about going and seeing his two paintings there. Just the other day I went to Manchester to see Hylas and the Nymphs for the first time. It was amazing! I've written about that too. There is also Echo and Narcissuss across the water from me in Liverpool which I've been to see a few times lately (I never tire of looking at Waterhouse's paintings). If you're interested I have my own website (www.imaginata.co.uk) with, besides my blog, paintings I've done of Waterhouse's work in the past. Some I quite like, others I'm not fussed on. My copy of Ophelia (in the blue dress) unfortunately falls in the latter category. I say unfortunately because I think I read that's your fave painting? Thisbe, which I did in pencils, falls into the former. I'm in the middle of doing Fair Rosamund at the moment. I've taken a photo of each stage of the painting so I may post each one every few days on my blog. Hopefully people will find it interesting as the picture builds up - if anyone reads it, that is ;)

Thanks for the message, Jim! I am enjoying perusing your website. And might I say I am very envious of your proximity to such amazing works of art.