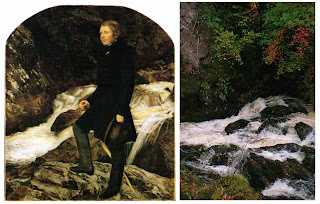 Last week I blogged about the amazing new application, Tag Galaxy, which allows you to search Flickr images with ease. Through searching the keyword, Pre-Raphaelite, I found several amazing images, but I was most blown away by the albums of Martin Beek. This man, an artist with an over 30-year admiration for the work of Millais, has assembled some truly remarkable research materials on him.

The above image (click for a link to it on Flickr) made me exclaim out loud when I saw it...Beek actually went to the vistas at which Millais painted his art, and in several examples, meticulously found the precise angle at which the artist might have been working. Above on the left, you see Millais' famous artwork of Ruskin, and on the right is Martin Beek's photo of the location. Remarkable! 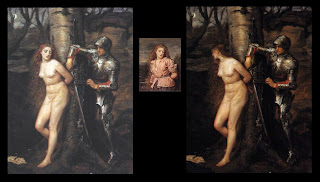 Beek's Flickr album of Millais landscapes is here. He also has another album on Millais, which includes some other wonderful visuals I'd never seen before. Several images compare Millais' sketches side by side with his finished art, and I was especially fascinated with this collage of images (please do click image to see larger, or view his Flickr page on it here). Beek writes:

"Millais' painting "Knight Errant" (Tate Britain) caused something of a shock when first exhibited in 1870. It failed to find a buyer and was changed following its first exhibition at the RA. I've reconstructed its earlier appearance with the model's head facing forwards. The damsel's face was eventually cut out from the main canvas and inserted into a smaller one then clothed, becoming the painting now known as "The Martyr of The Solway" (Walker Art Gallery Liverpool). A new head was painted for "Knight Errant" in during 1871. Millais made no further attempts at painting the female nude. His only other work from an unclothed figure was A Forerunner 1896 (Glasgow Museum and Art Gallery).

Alison Smith in her book " The Victorian Nude" states:- Millais's painting, therefore, may have been an attempt to negotiate the problem of representing the nude female in close proximity to a clothed man. His couple are not presented as lovers; the gendered identities are unequivocal: stalwart hero, forlorn maiden. Nor is the picture painted in a way to invite readings of impuissance or sensuality.

If Millais was indeed offering a critique of Leighton's refined manner, why did the Knight Errant so offend? A considerable number of critics were affronted by the nakedness of the female victim. J. B. Atkinson declared in the Saturday Review: 'So literally . . . has the model been transcribed, that it is said the ligature of draperies may be detected on the contours. The figure thus bearing signs of having been denuded, it is scarcely surprising that the spectators call for clothes.' Several critics cast aspersions on the 'real' figure that lay behind Millais's treatment. 'The woman is not over pure in character or refined in expression', F. G. Stephens announced, but 'somewhat feverish-looking, and the carnations of the cheeks appear veiny as in worn faces'.Millais's damsel is likewise buxom, and her hair unbound, in contrast to the classically filleted style favoured by Watts and Moore. AS (1996)"


There's so much fascinating stuff here. I applaud this man's clear love of Millais, and the fascinating images and information he has made available through Flickr.
Posted by Grace at 9:40 PM

Thanks for this, I have a great interst in Millais and happy for you to use any of the photographic material I have from Scotland where he often painted.

Thanks, Martin! It's always a pleasure to come across admirers of great artists :)

Please contact me regarding the painting a childs world, bubbles. I believe I have an artist original. Cfunnye@aslmarketing.com