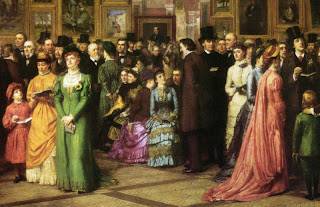 Today I wanted to chat a bit about Artistic Dress. First began by the Pre-Raphaelites (well, the wives and female family members of the P.R.B.), the idea of Artistic Dress was begun for aesthetic and non-political reasons. Although the burgeoning Victorian dress reform movement encouraged this trend for furthering their goals of getting rid of the corseted and non-natural form of Victorian fashion, the Pre-Raphaelites and their families were more focused on the idea of incorporating nuances of the medieval style to their modern attire. However, in Pre-Raphaelite dress, as well as in their art and design, it wasn't sufficient to simply try to exactly reproduce the medieval era. The goal was to take the romance and purity of the medieval era, and make it relevant for the modern Victorian.

Although I am a long-time admirer of the Pre-Raphaelites, I am a newcomer to the entirety of their influence. I only first heard of the Arts & Crafts movement about a year ago, and the Artistic Dress movement is a recent discovery. However, I find it to be, like so many other things I discover about the beliefs and revolutionary thoughts that orbited around the PRB, quite reminiscent of my own aesthetics and thoughts. Ah how I wish I had been born to a Victorian pauper and "discovered" by an artist in the Brotherhood sometimes! (My choice would likely have been Burne-Jones, incidentally) But I digress. The admiration I hold for the Artistic Dress Movement is twofold: first, it is near and dear to me that they sought to incorporate a medieval aesthetic into their every-day dress while still not appearing in "costume," and secondly that they were willing to undergo the criticism and mocking of the society as a whole in order to stay true to their personal ideals of beauty. Both of these sentiments are near and dear to me, and greatly admired.

I have a friend, who I personally believe to be one of the most beautiful women I know, who I consider to be a modern-day Artistic Dresser. Although she lives in a conservative area of America, she wears breathtaking velvet skirts and jackets, Parrish Relics with everything, and her russet hair in a waist-sweeping length. This kind of devotion to one's personal aesthetic despite popular cultural "norms" is precisely the modern day lesson to be learned by artistic dress. 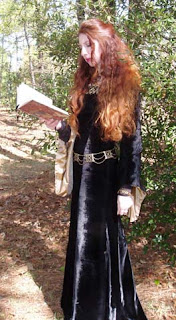 The artwork at the top of this post is a satiric painting by William Powell Frith, showing the difference between artistic dress (worn by the women on the left and right in the painting) vs. the modern Victorian style (worn by the women in the middle).

A diagram showing the horrifying effect that a Victorian corset can have on the internal organs over a period of time. The style of artistic dress, with its focus on fabric drapery and the revealing of the subtlety of a woman's natural un-corsetted body, fit in quite wonderfully to the aims of the Victorian Dress Reform Movement.

Jane Morris, the Pre-Raphaelite beauty, wearing a wonderful example of an Artistic Dress.

I found the biography of Jane Morris to be a wonderful source for information on Artistic Dress.
Posted by Grace at 5:36 PM

You are doing such a great job with this blog, Grace! It's a pleasure to see your entries pop up on my Google Reader. Our Miss L. is indeed a true emodiement of modern artistic dress. So lovely! If you haven't, check out the 1979 "Nosferatu." There are some really amazing examples of artistic dress in the women's costumes, especially one worn by Lucy that is almost a faithful copy of Janie's dress in Morris' painting of Guinevere.

I was going to do a post last week about art imitating art - movies inspired by pre-Raphaelite gowns. Of the examples were Miranada Richardson's dresses in Sleepy Hollow, which I recently watched. The dresses she wears are so like the Burne-Jones paintings of the von Bork family. Cowper does a few similar gowns. The mesmerising Miranda must have a designer who follows her from set-to-set because in the TV version of Snow White, her costumes are likewise inspired. There is one scene where Snow White's mother leans out a window and pricks her finger on a rose. In that scene, she is dressed in a white gown with red pomegranates - a very near copy of William Morris' "La Belle Iseult". The entire bedchamber looks like a painting come to life. I've only a VHS of the film, so cannot do a screen grab to demonstrate.

I found this YouTube video showing Miranda in that film. http://www.youtube.com/watch?v=sJY0fG_wQ4Q&feature=related

Ro, is that the Nosferatu with Isabella Adjani?

Robin, you have to show me how to use the Google Reader to keep track of blog posts! And I'll have to Netflix that movie.

Lisa, you read my mind! I was hoping to do a future post on that very topic, including the Sleepy Hollow dress, and the robe worn by the redhead in "Perfume" (Soul of the Rose by Waterhouse). I definitely will have to include the Snow White movie now!

And I adore Miranda Richardson, in part because of the amazing medieval/fairy tale roles she plays. Have you had a chance to see Jim Henson's Storyteller yet? She's in an episode of that, being quite a wonderful evil witch/stepmother.

Mind reading - one of my many talents:)

I just placed an order on Amazon for the Jim Henson DVD as the price was great. Score!

That robe was my favorite thing about Perfume. I have very strong sensual reactions to movies...the sights, sounds, smells. I can "feel" dampness, the coolness of a forest. The "smell" in that movie about did me in!

Yes! The Nosferatu with Adjani. I have some major dress envy for those costumes :-) Her friend wears a red gown that is especially nice. I wish I could make screen caps, but I only have the VHS.

I'm having a Hermione moment - does my hair really look that "fuzzy" in real life?

No, Lisa, at least not when I met you! But I thought it looked "glowy" in this picture, not fuzzy! :P

I found this article very interesting. I love that other people are getting interested in artistic dress as a topic. I did my senior thesis on it, and designed three dresses (made up by a wonderful seamstress friend of mine).

I thought perhaps you might like to visit my blog, (not nearly enough posts yet!), victorianbohemia.blogspot.com. I've posted the first part of one of my thesis papers there, plus sort of an explanation of my interests, etc. I'm hoping to do more regular posts there, as I am continuing my researches into the subject still. One of the topics I am most interested in is the women who wore the gowns and the designers who created them, other than Liberty. One of my main muses is the actress Ellen Terry, who was the lover of E.W. Godwin, the Aesthetic designer and the man who ran the artistic dress department at Liberty's in London. She wore Aesthetic dress for much of her life, both on stage and off. One of the women who designed for her after she left Godwin was Alice Comyns Carr, whose memoirs I have read. Fascinating stuff!

Anyway, good to find more people interested in the topic, and your friend is indeed a modern day Aesthete! I wear lots of velvet and flowy stuff myself, so I appreciate others who feel free to express their inner artistic life!

I was doing research on corsets when I found your blog. I'd never heard of "artistic dress", it's quite interesting. Great blog!

Hello Fellow Appreciators! I am searching for an image of a woman in oriental style dress from the Pre-Raphaelite or Dress Reform movements. Any ideas? Thank you for your help. Maria