La Primavera and the Pre-Raphaelites 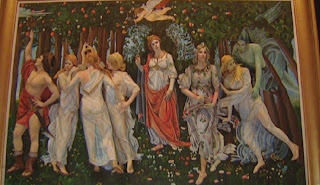 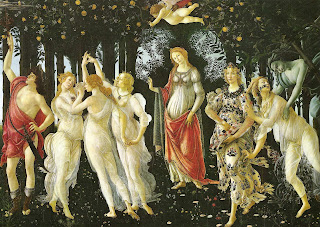 My husband and I have been enjoying the documentary series The Private Life of a Masterpiece. It's an excellent series for anyone who enjoys art and art history, or anyone who enjoys good educational television. The series is broken down into discs by era, and I was sad to find no Pre-Raphaelite art represented in the Victorian disc. But a few nights ago, we were watching the disc on Renaissance masterpieces, and the episode featuring Botticelli's La Primavera came up.

and also noticing that the flowers on Flora's gown looked very like the Daisy pattern created by William Morris. 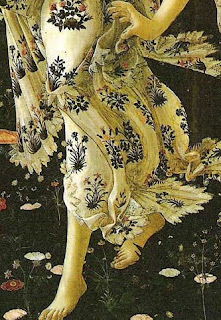 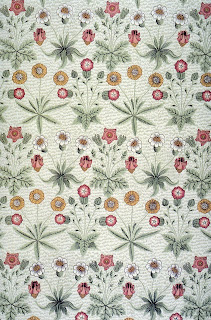 And then next thing I knew, the documentary began speaking of the Pre-Raphaelites!

The documentary explained that in the mid-19th century, Boticelli's art was deemed too crude and sentimental for popular taste, until the Pre-Raphaelites came along.

I'll transcribe the documentary from here on. Please note that these opinions aren't necessarily my own, but I did find what the document said to be quite interesting.

The Pre-Raphaelites were fascinated by the uninhibited pagan art of ancient Greece and Rome, and by artists like Botticelli who had been influenced by it. Now that The Primavera was on display, they were able to study it closely. And they began to impose on it their own rather melancholy sensibilities. The Pre-Raphaelites picked up on this idea of sadness in Botticelli's paintings. The female figures seem burdened by their responsibilities...There is always this sense of forboding, or dread. That deathly dread was exactly what the Pre-Raphaelite artists were looking for. And it wasn't long before they were imitating Botticelli's style in their own work. In one of English art's most famous images, Millais' Ophelia, the flowers of Flora's dress and bouquet seem to have been transfigured into a scene of despair and death. 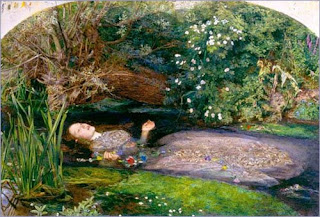 The reliance upon Botticelli was something that really worried the commentators. They described work when it followed in Botticelli's footsteps as showing the human form looking sickly, looking ill, looking pale, looking death-like. More troubling still was a painting by the gay artist, Simeon Solomon, a response to the Primavera. It was entitled The Song of Spring. 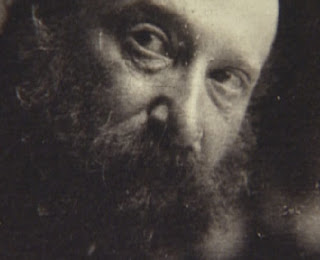 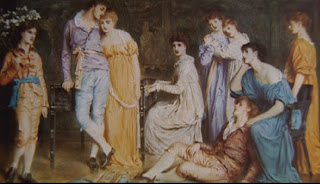 The composition was based very clearly and distinctively on Botticelli's La Primavera. In the center of the painting as a controlling agent, we get this female figure. Not with her hands out in blessing, but with her hands actually playing on the keyboard. There are two young women embracing, staring into space. And on the extreme left, instead of the figure of Mercury, you get a young man in knee breeches, carrying a branch of blossom. His painting takes on a kind of graciousness, a very strong sense of sadness. He sees in that sadness that abstraction of the figures, an expression of his sexuality, a kind of gay response to Botticelli. Simeon Solomon's painting drew attention to aspects of the Primavera that had perhaps always been there, but were too shocking to mention in polite Victorian society. It was no wonder that it was the Pre-Raphaelites who rediscovered Botticelli, because they seemed to intuit in him that strange apprehension of sexuality. The figure of Mercury in La Primavera is one of the most glamourous, indeed voluptuously homoerotic images in all of Renaissance art. There's great ambiguity about what Mercury is doing in the painting. I myself [critic interviewed] think he is looking for fruit, and there is a sexual innuendo in there. And the fact that he has turned his back to the lovely ladies behind him indicates that he is looking for forbidden fruit. 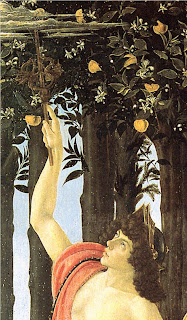 Great book to unravel the pre-raphs is edgar wind, Pagan Mysteries in the Renaissance. dgrossetti, up to his neck in this stuff. I wrote a whole novel about it...

Thanks! I'll have to look for it!

Thank you for this article. I am looking for identical, similar or analog paintings or engravings of Botticelli's Primavera. On top of your article is an image of a similar painting: do you know the artist and other details? Do you know of any other imitation?
Greetings.

If you're speaking of the image at the very top of this blog, it's actually a theatrical living recreation of the artwork. I screen capped the image from the documentary film I mentioned.

Very interesting: I will look up this DVD and hope to find details about this 'living picture'. I am preparing a "connectivity map" for the Primavera like I have already done for Titian's 'Venus and the Musician' and Watteau's 'Embarkation for Cythere', see my website. Your article will help preparing the map. So far I have not found much, not even an engraving, which is very surprising. Many thanks!