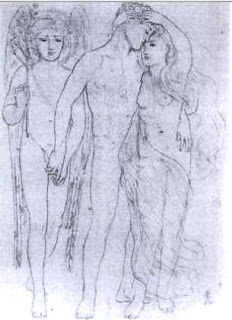 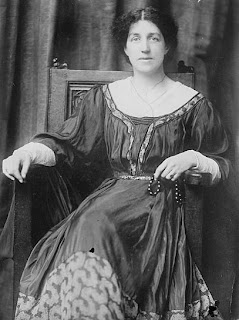 Thanks to the book Pre-Raphaelite Art in the Victoria and Albert Museum for some of the information above.
Posted by Grace at 1:11 PM

Interesting post! I've read about Solomon, but I wasn't aware that only the Burne-Jones's remained friends with him after his arrest.
And I never knew that about May Morris--you learn something new every day!
Stop my blog--you have an award waiting for you!

There was an excellent Simeon Solomon exhibit and accompanying catalogue curated by Colin Cruise, one of the chief experts on Solomon. It is called Love Revealed: Simeon Solomon and the Pre-Raphaelites (Merrell.2006).

Jan Marsh's dual biography from 1986 on Jane and May Morris is still a classic.

The writer Violet Paget (Vernon Lee) (1856-1935) who moved on the periphery of the PR Circle was also a lesbian.

The coded language of homosexuality in Victorian art has only recently been explored by scholars.

Thank you Margaret! And thank you for the award, which I'm going to collect right now :)

Judy, how wonderful!! I definitely want to try to find that catalogue...thank goodness for inter-library loan.

Many people believe that Evelyn De Morgan had a lesbian relationship with the model for her painting Flora.

Henry Holiday and his wife Catherine also stayed friends with Solomon. It was Holiday who brought Burne-Jones to see Solomon and re-established their friendship.

Great post, thank you! First, I'd like to say that the term "sexual preference" is incorrect, as it implies "choice". We "prefer" classical music to jazz, roses to lilacs, spring to winter, etc. Our attraction to a certain gender on the other hand is an "orientation".

Secondly, if the Burne-Jones's remained friends with Solomon after his arrest, why did he live on the streets and die in a workhouse? Would be interesting to know if that continued friendship included food, clothing, shelter, and encouragement.

Thank you for the correction, anonymous. This blog is just an archive, but I have edited the post to correct.

As for reconciling the friendship with his sad ending, that’s also a good question. Perhaps they remained friends after his arrest, but fell out at some point after? Not sure, and the biographies I’ve seen aren’t clear on the facts.