The Importance of Being Earnest

Thanks to my friend on Live Journal, cinemafantasy, who pointed out in an entry that the movie The Importance of Being Earnest has several "fantasy daydream" scenes in Pre-Raphaelite theme. I had to see for myself, and rented the movie. I enjoyed it greatly, and got a huge kick out of the scenes in which Cecily's admired Pre-Raphaelite images came to life in her mind.

I had to take screencaps!

Early in the movie, Cecily is being tutored, and sneaks a peek at a page in her book with a chivalrous artwork:

and then later fantasizes about it coming to life: 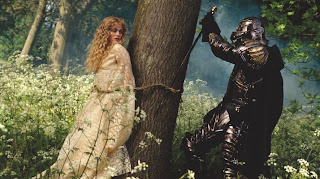 Later on, when she actually meets her beloved, she turns to a page in her journal:

And dreams of how it is now reality (my favorite scene!)

I love it when the Pre-Raphaelites show up unexpectedly in movies like that!
Posted by Grace at 8:32 PM

I'd totally forgotten about this movie! Thanks for reminding me. I love the final scene!

The final scene is great! And I didn't even mention the Pre-Raphaelite style art that the Reverend was doing. That amused me greatly too :)

Haha, I love that silly play. Wilde is totally timeless. And that film has beautiful cinematography!